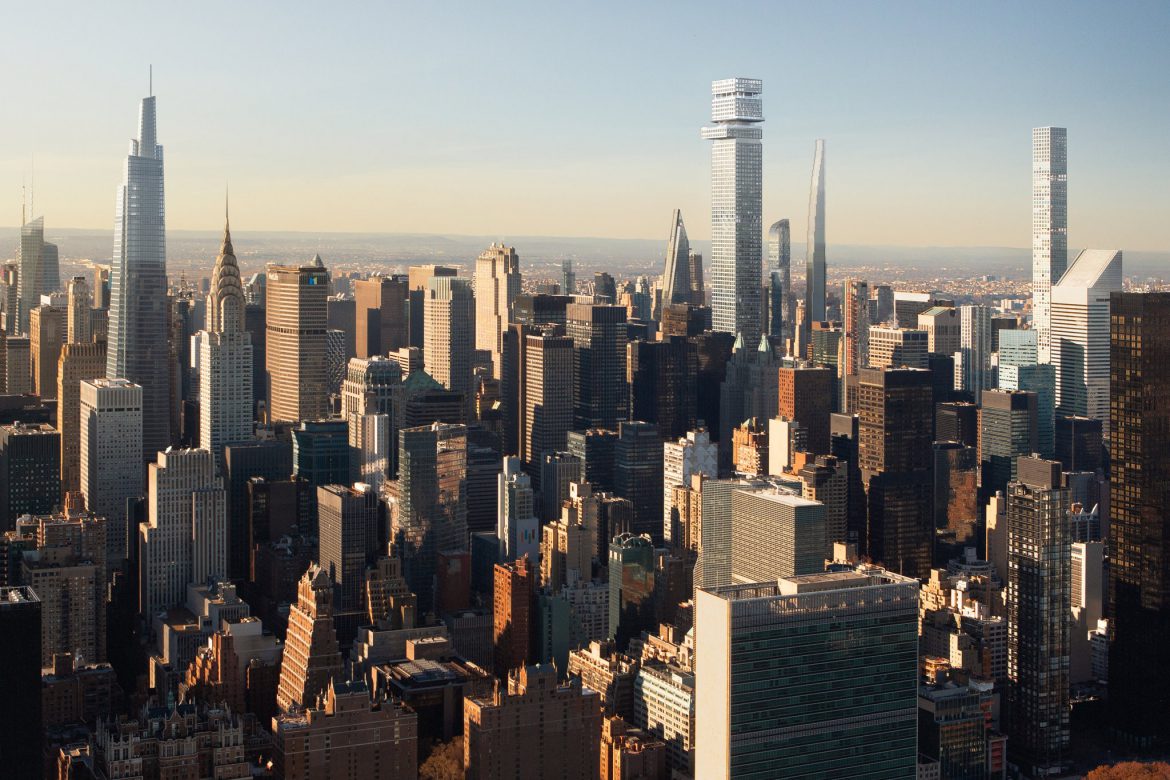 For decades, the New York City skyline was dominated by one building, the 1,250-foot-tall (381-meter) Empire State Building. But 17 “supertall” skyscrapers — defined as over 300 meters (984 feet) in height by the Council on Tall Buildings and Urban Habitat — have been started or completed since the Great Recession, completely remaking the city’s traditional silhouette.

If the developer Harry B. Macklowe has his way, an 18th will soon join them. On Friday, Mr. Macklowe submitted a preliminary application to the Department of City Planning outlining his intention to build a new super tower, east of Fifth Avenue between 51st and 52nd streets, overlooking St. Patrick’s Cathedral.

If approved at 1,551 feet (472.7 meters) tall, his skyscraper, known as Tower Fifth, would rank as the second-tallest building not only in New York, but in the Western Hemisphere.

In the heady world of competitive building, Tower Fifth would hover 216 feet (65.8 meters) above the roofline of One World Trade Center — which would remain the city’s tallest building because a mast brings its official height to 1,776 feet (541.3 meters) — and reach a scant 12 inches (305 millimeters) above Central Park Tower, the skyscraper nearing completion on Billionaires’ Row.

“It’s a chance to change the skyline,” Mr. Macklowe said at his office in the General Motors Building (a mere 705 feet (215 meters) tall).

But the proposed tower, likely a swan song for the 81-year-old Mr. Macklowe, would have to clear significant hurdles before reshaping the city.

The project could impinge on five landmark buildings — the Look Building, two townhouses, Rockefeller Center and St. Patrick’s Cathedral — so it will require approval by the Landmarks Preservation Commission.

And it will need to survive a lengthy and grueling city review. Mr. Macklowe is asking for special permits, zoning changes and approvals to build a tower in East Midtown that is 66 percent bigger than would be allowed under the current zoning.

The tower would be Mr. Macklowe’s second crack at shaping the city’s skyline. Already, his slender, white monolith at 432 Park Avenue is visible from New Jersey, Westchester County, and Long Island as it rises to its full height of 1,397 feet (425.7 meters) at 57th Street. For the time being, it is the tallest residential tower in the Western Hemisphere.

Advances in engineering and technology, new zoning, developer ego and the potential for fantastic profits have propelled new towers ever higher. The only city in the world where the march of supertall towers has moved more swiftly than New York is Dubai, where 29 supertalls have been erected since 2008, according to the Council on Tall Buildings.

Residents and corporate tenants alike will pay a premium for top floors, especially if they provide unobstructed views of a city jewel like Central Park.

“There’s no limit to how much people will pay to get close to heaven,” said Mitchell Moss, a professor of urban planning at New York University.

At Mr. Macklowe’s 432 Park tower, the project’s all-in costs were estimated at about $1.3 billion, while the sale of all the units in the building could reap more than $3 billion, leaving a gross profit of $1.7 billion.

But critics have decried the social and environmental impact of the supertalls, especially along a stretch of 57th Street known as Billionaires’ Row, where five of them are clustered. The lights in many of the apartments do not go on at night because many of the units have been sold to foreign owners who spend relatively little time in New York.

Many New Yorkers are also dismayed by how their neighborhoods have been rendered unrecognizable by the rising towers. “Greetings from Grand Canyon, Upper West Side,” says a colorful graphic on the website for Landmark West!, a civic group dedicated to “a long range effort to curb supertall towers.”

The proliferation of supertalls puts the city at risk of becoming “darker, drearier and more austere than its denizens deserve,” the Municipal Art Society, a 125-year-old nonprofit organization, wrote in its 2017 report “The Accidental Skyline,” which was critical of what it called “loopholes in the city’s existing regulations, which have been exploited to create larger buildings than ever intended by zoning.”

Tower Fifth is an enormously ambitious project, even for Mr. Macklowe, who grew up in a suburb north of Manhattan, dropped out of the University of Alabama and returned to New York, eventually settling on a career in real estate.

He built the Apple cube in front of the General Motors Building and either built or renovated luxury residential and commercial towers including 1 Wall Street and 510 Madison Avenue.

His notorious reputation, for some New Yorkers, is rooted in a “midnight demolition” in 1985, when his company pulled down several single-room-occupancy hotels in Times Square without getting a permit or turning off the gas, only hours before a citywide moratorium on demolitions would have gone into effect.

Mr. Macklowe has also shown a willingness to bet the house on his projects, a practice that has made him a millionaire many times over with a vast art collection and a racing yacht, the Unfurled. And it has left him financially devastated at least three times in a nearly 60-year career.

Mr. Macklowe believes that Tower Fifth will surpass what he used to regard as his crowning achievement, 432 Park Avenue, a supertall tower completed in 2015, that helped solidify the transformation of New York into a real estate-driven city that, like London or Hong Kong, has become a pricey pied-à-terre for the super wealthy.

The critic Aaron Betsky, in Architect magazine, described 432 Park as “a refreshing alternative to the mediocrity of the buildings around it.” Michael Kimmelman, The New York Times’s architecture critic, was more acerbic, describing the skyscraper as a “middle finger stuck up at the city.”

Tower Fifth is an even more challenging project.

The proposed building will require billions of dollars to build and includes an expensive and energy-efficient facade rarely seen in the United States, a public concourse, plush tenant amenities — a lap pool, yoga room and multilevel running track — and the city’s tallest observatory, where visitors would be able to dive down a transparent, 60-foot (18-meter) corkscrew slide.

Despite its reputation, New York has always had a schizophrenic attitude toward skyscrapers, inserting height restrictions and setbacks into the zoning code even as buildings climbed in height. But Mayor Bill de Blasio’s administration seems to have tossed out the height inhibitions of even pro-development mayors like Michael R. Bloomberg and Edward I. Koch, in part because Mr. de Blasio is willing to trade additional floors for social benefits, such as affordable housing or subway improvements.

In the hope of gaining city approval, Mr. Macklowe and his team — Dan Shannon of Moed de Armas & Shannon Architects and Gensler, a second architecture firm — shoehorned their tower onto the site, in an attempt to mitigate its impact on the surroundings. They have also held preliminary meetings with the city’s Planning Department, the Landmarks Preservation Commission and with members of the local community board with the hope of quelling potential opposition.

An 85-foot (26-meter)-high glass lobby would stretch from 52nd Street to 51st Street, where the entrance would dramatically frame the side-street doors to St. Patrick’s. Escalators would lead to the lower levels, restaurants, shops and elevators for the observatory.

A glass-walled public auditorium would sit above the lobby and look onto the top of St. Patrick’s.

The office tower itself, however, would step back from St. Patrick’s, rising on 52nd Street atop two stems or stilts, nearly 400 feet (122 meters) above the sidewalks. The 96-story tower is designed as a sleek shaft until it reaches the top, where a two-level slab juts out from the northern and southern sides of the building, before the tower resumes its ascent.

The proposed building would cantilever about 100 feet (30 meters) over the Look Building and 300 feet (91 meters) above an adjoining landmark, the John Peirce house, which will almost certainly spark criticism from preservationists.

Mr. Macklowe will have to cut a pricey deal with the owners of the Look Building and Peirce house for the cantilever and purchase roughly 580,000 square feet (53,884 square meters) of unused development rights to get to the building’s full height. Much of that will probably come from St. Patrick’s Cathedral.

Mr. Macklowe boasted that his observatory would be the highest of the six existing or planned observatories in the city.

Daniel Garodnick, a former city councilman who played a key role in the city’s rezoning of East Midtown for taller towers, was taken aback by Mr. Macklowe’s plan.

“This project goes way beyond what is allowed to be built,” Mr. Garodnick said, “and it needs to be carefully scrutinized in a detailed public review.”

Mr. Macklowe was undaunted. He contended that his project “validates the wisdom” of the city’s rezoning.

“Tall buildings are a reality,” he said. “The days of restrictions on buildings are really over. This is a building that’s never been built before, a 21st-century building.”