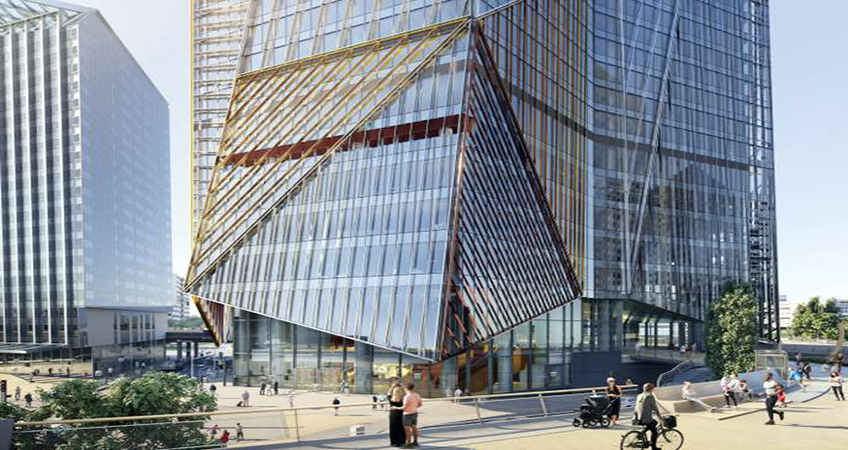 The currently under-construction Hekla Tower at La Défense is emblematic of next-generation skyscrapers: one that is integrated with the urban habitat. The building, which is set to rise 220 meters, will be clad in a prismatic glass façade and topped with a garden under a transparent roof. The Hekla tower, whose first stone was laid Monday, June 17 at La Défense, will be introduced by architect, Jean Nouvel after several unrealized projects in the central business district.

Beyond the Hekla tower, the Alto (160 meters) and Trinity (140 meters) towers are under construction, while two twin tower projects, The Link (244 and 176 meters) and the Tour Sisters (229 and 131 meters) are being launched. These projects are set to renew the skyline of the business district. “For a while, it was said that horizontal office campuses would supersede the skyscraper, but the success of these projects indicates that verticality has retained its appeal,” said Marie-Célie Guillaume, the general director of the public institution Paris la Défense.

“Hekla will be clad in a prismatic glass façade and topped with a garden under a transparent roof.”

One of the strongest draws of the business district is its centrality. “One disadvantage of many campuses has been that they are often located far from the city center, but today, location takes priority: millennials want to work and have a social life all in the same place,” says Patrick Bosque, general manager of Hines, co-investor in Hekla with AG Real Estate—both groups sold the 80,000 square meters of the tower to Amundi Real Estate and Primonial REIM for EUR €572 million (US$657 million) excluding taxes.

“The 1,700 square-meter plateaus are totally flexible, the location of the corridors and meeting rooms are not strict: it will not feel like a tower,” says Bosque. “Hekla is part of a revolution of uses: we have worked on the porosity between the building and its environment, with places of relaxation and the possibility of going out to work in the park at the base of the tower,” adds Vincent Virlogeux, Project Manager at AG Real Estate.

For more on this story, go to Le Monde.