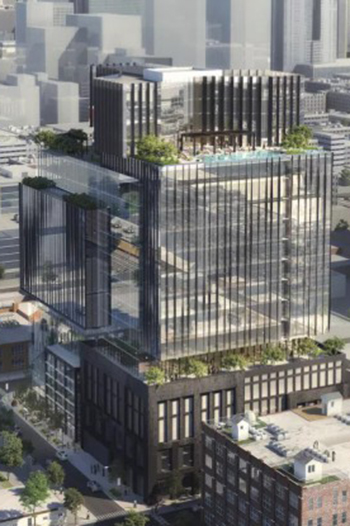 The proposals will need city approval to move forward as part of the area’s ongoing transformation from an industrial meatpacking district into Chicago’s hottest office and hotel hub.

Replacing a single-story industrial building, the plan for 1101 W. Carroll Avenue would rise 18 stories or roughly 300 feet (91 meters). Known as the City Technology Center, the project is a joint venture of TechNexus and Ocean Tomo and comes from local architect firm Pappageorge Haymes Partners.

The building features a mix of glass, metal, and brick façades and would include office space plus a tech incubator, a display gallery, 282 parking spaces, and a below-ground auditorium. The structure is topped by a 200-room hotel arranged in a Y-shape reminiscent of Chicago’s famous municipal device.

Although the development team presented its plans to West Loop neighbors four months ago, the recent zoning application is a clear sign that the City Technology Center is looking to move forward. Meanwhile, a group of neighbors opposing the project launched a website titled “Save Fulton.”

The proposed development is Trammell Crow’s second foray into Chicago’s Fulton Market District. It follows in the footsteps of the company’s 14-story office building, known as the West End on Fulton, currently under construction at the corner of Fulton Market and Ogden Avenue. The design of both projects comes from Minneapolis-based ESG Architects.

City planners have pumped the brakes on a third proposed project, a 16-story West Loop luxury hotel for now, over concerns it could make traffic even worse in the booming area.

Marc Realty and DDG Partners unveiled plans for the 197-foot (60-meter) Standard Hotel at 1234 W. Randolph St. at Catalyst Ranch in the West Loop on 1 October 2019. The plan was met with concerns from some neighbors who said the project, which sits between high-capacity venues Alhambra Palace and City Winery, would exacerbate the parking shortage and add to traffic congestion in the booming area.

During the meeting, Noah Szafraniec, a supervising zoning plan examiner with the city’s Department of Planning and Development, said the agency shared residents’ concerns about traffic congestion. Before the city signs off on the project, the developer needs to present a detailed plan showing how they would handle valet parking and other traffic the hotel would bring, he said.

“We love City Winery, but we acknowledge that there is a problem when there’s an event there,” Szafraniec said.  “Everyone knows it. You live it, we see it, we go to it …We have put the onus on the developers to work with [City Winery,] and Alhambra Palace and find a solution before we are going to accept this as a city.”

The 259-room hotel, designed by NORR Architects, will feature a ground-floor restaurant, outdoor plaza, third-floor terrace as well as a rooftop pool and bar, said Michael Ezgur, a zoning attorney with the development team. The hotel, which would not have any on-site parking, would use valet service for hotel guests and visitors, Ezgur said.

A team of investors previously planned to build a 23-story hotel with 289 hotel rooms, a rooftop bar and a pool at the A New Dairy Co. site, according to a zoning application filed in early 2019, but that plan was later revised.

The Randolph property is currently zoned as C1-3 and developers are seeking to have it changed to DX-5 as part of a Planned Development.

Under the Planned Development, the dairy facility would be razed to make way for the hotel, Ezgur said.

Following the meeting, Ezgur said traffic experts hired by the development team were working on solutions.

If all goes well, developers aim to begin construction by late spring 2020.

For more on these stories, go to Curbed Chicago and Block Club Chicago.