Third and Final Tower Tops Out at TOD in Dunwoody 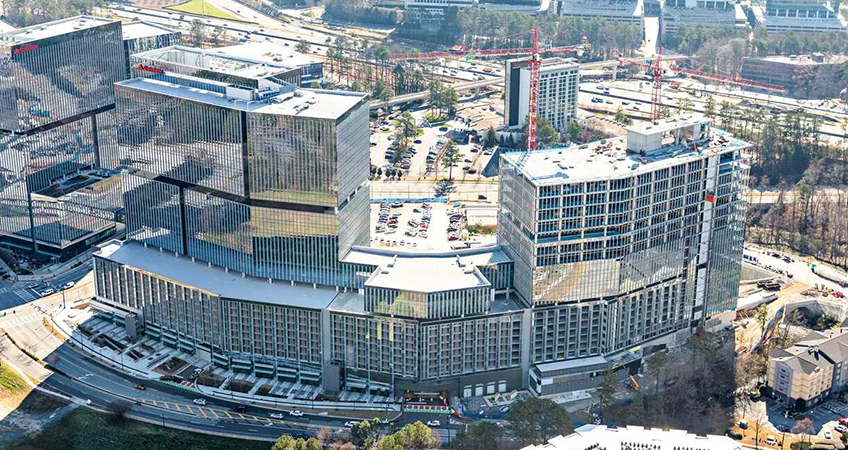 Developer KDC relayed the week of 27 March 2020 that the second of three planned towers at the Park Center office complex, located in the suburb of Dunwoody, had wrapped construction and opened, with a third well on its way.

Located across the street from the Dunwoody MARTA rail station, the campus is ultimately expected to feature nearly 1.7 million square feet (158,000 square meters) of office space.

The first tower erected, which delivered in October 2016, comprises 600,000 square feet (56,000 square meters) of offices. A link between the building and the train stop wrapped in early 2017.

And in February 2020, the 430,000-square-foot (40,000-square-meter) Building Three, which adjoins the second tower by way of a seven-story parking podium and a ninth-floor auditorium, completed vertical construction.

Over the next nine to 12 months, barring any hiccups, 41,000 square feet (3,800 square meters) of retail space in Buildings Two and Three is expected to come online, too.

State Farm officials have said in the past that many of their staff use mass transit.

“These buildings are strategically overparked because of the need for State Farm to bring in a much larger than usual workforce to serve their policyholders in the event of a natural catastrophe” or other unplanned events, Chambers added.

For more on this story, go to Curbed Atlanta.