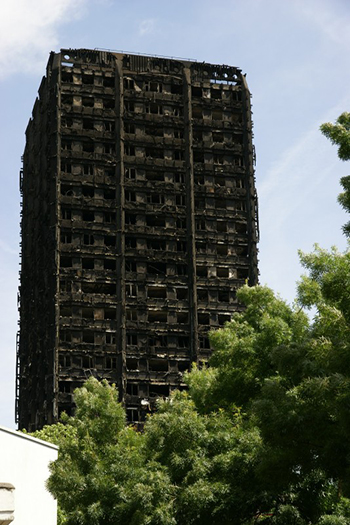 The inquiry into the fatal Grenfell Tower fire of 2017 continues. The latest revelation concerns the choice of flammable insulation, which is blamed for rapidly spreading the fire.
16 July 2020, London, United Kingdom

Architect Bruce Sounes told the inquiry on 14 July that he had originally wanted to use the non-combustible Rockwool insulation on the recladding of the tower in west London.

However, to meet the U-value target of 0.15W/m²K for the insulation put forward as a target by engineers Max Fordham, the architects believed so much Rockwool would have been needed it would have created “buildability and aesthetic issues.”

According to Sounes, who said he had done his own “amateur detective” calculations to work out the amounts required, the requisite thickness of Rockwool would have pushed the cladding line out to around an “unfeasible” 450 millimeters.

Emails show that the architects was aiming instead at a specification of between 150 and 200 millimeters for the part of the cavity in which the insulation would sit.

Counsel for the inquiry Kate Grange showed an email from Andrew McQuatt of Max Fordham, who suggested that Celotex RS5000 insulation could be used to meet the U-value target, which actually exceeded the requirement for refurbishment projects and was the standard for new-build homes – to fit the space specified.

Grange had previously grilled Sounes over why the architect had stuck to the ambitious U-value target, given that he had admitted that his first-choice material of Rockwool would have been “the safest in terms of fire.”

Sounes said he “couldn’t see any reason to abandon the target,” telling the inquiry “it was in the project’s interests to try and achieve it.”

He said: “With hindsight, obviously no one challenged the insulation.”

Sounes added: “We have done a lot of work with Max Fordham, and they pride themselves as aspirational engineers […] they have done exceptionally sustainable buildings.

“The emphasis on passive sustainability was something we shared with Max Fordham over a number of years.”

Counsel questioned Sounes’ claims that 450 millimeters of Rockwool would have been needed to achieve the 0.15W/m²K U-value targeted and pointed to evidence supplied to the inquiry by its architectural expert Paul Hyett.

She said: “Mr. Hyett has run the calculations to see what thickness of mineral wool could be achieved and what U-value you would get. His calculations are that, with a mineral wool, it’s possible for the spandrel condition to produce a 0.14W/m²K U-value, so that’s under the 0.15W/m²K, against a 250-millimeter mineral wool insulation build-up. So, it’s perhaps thicker than you were envisaging in your email of 200 millimeters, but it’s 250 millimeters.”

Sounes replied that his thickness calculations had been based on an online calculator on manufacturer Rockwool’s website.

Asked about Max Fordham’s suggestion of using Celotex, a polyisocyanurate (PIR) board insulation, Sounes said he did not have concerns, saying “these type of products were widely used.”

He said: “At the time, I was of the view that Celotex didn’t burn, it just charred, and it was safe to use in cavities.”

For more on this story, go to the Architects’ Journal.