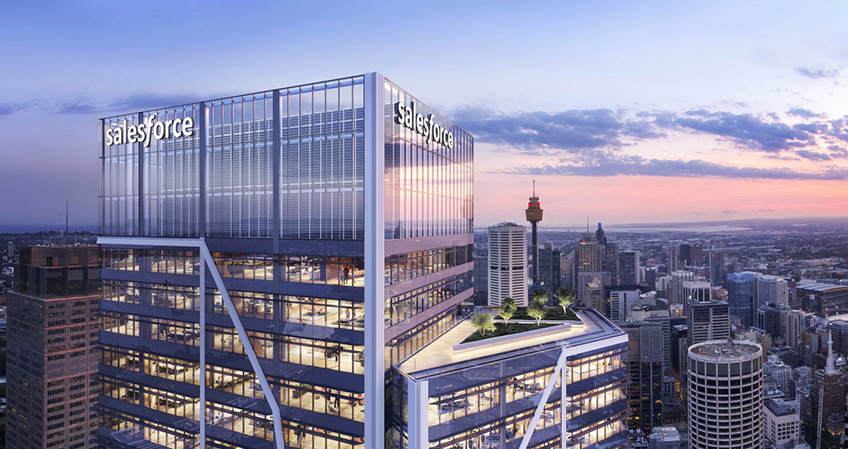 Sydney’s tallest building will be dubbed the “Salesforce Tower Sydney” after its newly-announced anchor tenant, with the US software giant taking up nearly 50 percent of the Circular Quay skyscraper.

The US$130 billion tech behemoth, which pioneered cloud-based customer management software, has secured the naming rights to the US$1.5 billion tower as it expands its presence in Australia.

Salesforce will occupy 24 levels in the 53-story tower on the former Jacksons on George site, with its 1,000-plus strong workforce set to move into the tower by late 2022.

The Foster + Partners-designed tower forms part of the broader renewal at Circular Quay, which Lendlease is developing in partnership with China’s Ping An Real Estate and Japan’s Mitsubishi Estate Asia.

Ping An is the majority partner, contributing 50 percent toward the development of the Circular Quay hub, with Mitsubishi and Lendlease making up the remaining 30 percent and 20 percent, respectively.

While Salesforce has not responded to inquiries about the details of the deal by the time of publishing, a sub-four percent vacancy rate in Sydney’s CBD has pushed the prime net face rent rate well above the US$1,000-per-square-meter mark.

Earlier this year, Deloitte struck a 10-year lease for 32,000 square meters at AMP’s neighboring Quay Quarter Tower for around US$1,400 per square meter.

The Circular Quay precinct will soon welcome the Sydney light rail, with other major office projects nearby, including Mirvac’s US$1.5 billion 55 Pitt Street and Poly’s namesake commercial tower at 220 George.

Salesforce, which is listed on the New York Stock Exchange under the ticker CRM, said it will convert the top floor of the tower into a shared hospitality space for its employees and customers.

The tower is one of 10 towers the company has its name on worldwide, including its headquarters in San Francisco’s tallest tower, a 61-story skyscraper designed by architect César Pelli.

As part of its Australian expansion, the company said it will add 1,000 new jobs in Sydney over the next five years.