Structural Work on The Nakheel Palm Tower Has Been Completed 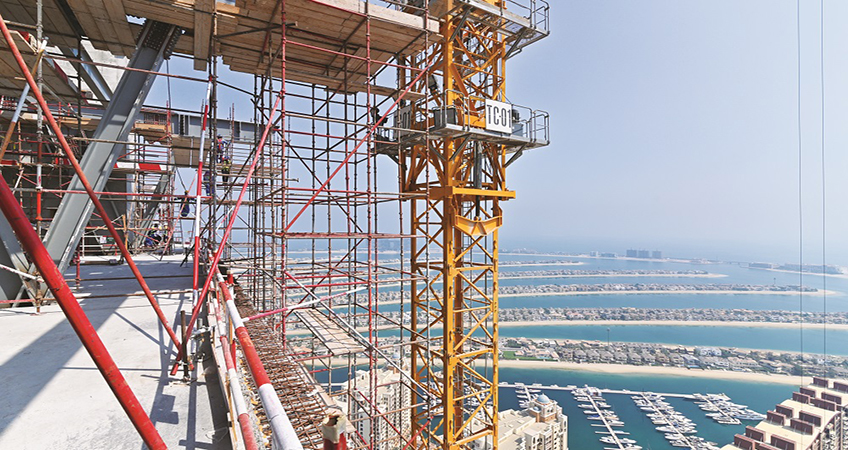 Dubai’s Palm Tower, situated at the center of the “trunk” of the Palm Jumeirah, was visited in the wake of a recent announcement by the developer that construction is nearing completion. Comprising 432 luxury residences and a five-star 290-room hotel with a range of dining and leisure facilities, the project is set to become a magnet for both residents and tours.

Among the attractions are a rooftop infinity pool, a restaurant, and a viewing deck, the developer says. Luxury hotel St Regis Dubai, The Palm, will occupy the first 18 floors of the building, and the Palm Tower residences will comprise the rest of the building with fully furnished studio apartments, along with one-, two- and three-bedroom apartments offering views of the Palm Jumeirah, the Arabian Gulf, and the Dubai skyline.

Furthermore, the tower will have direct access to Nakheel Mall, which is currently under construction and scheduled to be opened shortly. It will also offer direct access—via bridges and walkways—to Palm Jumeirah’s beach clubs, including Nakheel’s own Club Vista Mare and Palm West Beach projects.

According to the developer, structural work on the tower and the rooftop swimming pool has been completed. Perched 210 meters above the ground and covering 775 square meters, the infinity pool on the 50th floor of The Palm Tower will be one of the highest in the world, holding 930,000 liters of water. It will border four sides of the building and feature panoramic views across the Palm Jumeirah and the Arabian Gulf.

Above the pool will be a podium housing a specialty restaurant on the 51st floor, while the 52nd floor will house a 232-meter-high public viewing deck. Named the View at The Palm, the observation deck sits on top of the tower and will be accessible from Nakheel Mall. It will feature an interactive museum, which the developer says will tell the story behind the making of the man-made island, as well as a VIP lounge and areas for private events.

Designed by Gensler, the steel structure for the observation deck is currently being constructed. A fit-out contract for the project has been awarded, and construction is expected to be completed this year.

For the tower, glass façade work is currently in progress, and is approximately 60 percent completed. Internal fit-out is also underway in public areas, hotel guest rooms, hotel kitchen areas, and apartments, Nakheel says. For the residential apartments, fit-out work is scheduled to be completed by 2020.

However, despite the progress made to date, the Palm Tower has presented Nakheel and its main contractor, Trojan General Contracting, with several challenges during the construction process, the developer points out in a statement.

“Constructing a 232-meter tower in an area with limited space [is a challenge]. There are also large numbers of workers on-site—currently 1,500 – who are working in a high-rise environment and are close to a road where there is constant traffic. Furthermore, there are currently two tower cranes in operation on the project; at the peak of construction, there were three tower cranes being used.

“A fit-out contract for the project has been awarded and construction is expected to be completed this year.”

“Windy conditions caused by The Palm’s seafront location means that there can be big challenges when it comes to lifting materials. Careful considerations have to be given to the crane angles,” the developer says, highlighting some of the major issues the project team faces. “[In order to mitigate the dangers of working at height], edge protection and security nets on all floors have been installed to limit the potential of falling objects.”

Furthermore, Nakheel says the health and safety team at Trojan has a strong presence on-site, with five safety advisors on hand to ensure that all protocols and procedures are followed closely.

“There are specific safety requirements set out by Trakhees for high-rise buildings. These are all being followed on this project. There are also specific health and safety procedures in place for all visitors and workers on the site. Since construction began, there have been zero lost-time injuries,” the developer asserts, adding that there are tight controls in place to monitor noise levels and disposal of construction waste.

Given that the project is in such a congested area, another major focus for the project team was ensuring minimal disruption to residents and businesses. To this end, Nakheel says it was keen to work with all stakeholders.

“As with all of our projects, processes are in place to ensure that coordination between contractors and authorities is as effective as possible. We utilized the latest technology approved by the relevant Dubai authorities in the construction of The Palm Tower [to ensure the efficiency and pace of operations].

“We also ensured that residents and other stakeholders were kept informed of the project’s progress and of any inconveniences—such as temporary road diversions—during the construction process.,” Nakheel said. “Night shift work has also been minimized and limited to cleaning and housekeeping, so as not to disturb the surrounding properties and areas.”

With anticipation for the project growing, Nakheel is keen to emphasize the impact the project is predicted to have on not just the Palm Jumeirah, but on Dubai as a whole, with Aqil Kazim, chief commercial officer at Nakheel, highlighting that the project is a reflection of what the market desires.

“The Palm Tower is a lifestyle project, and that is what Dubai wants today; the views are naturally going to be waterfront and that is a unique opportunity we have. It’s important to emphasize that this tower is an iconic address on the island, with a five-star hotel, residential apartments, access to Nakheel Mall and the beach, all connected by the Palm Monorail,” he says, adding that access to the tower and mall is from multiple points.

“There are also five vehicle accesses and three pedestrian entrances, separate to the monorail, which is itself connected to the Dubai Tram, which in turn is linked to the Dubai Metro,” he concludes, emphasizing just how the project will connect the island to the rest of Dubai, truly becoming the heart of Palm Jumeirah.

For more on this story, go to ME Construction News.