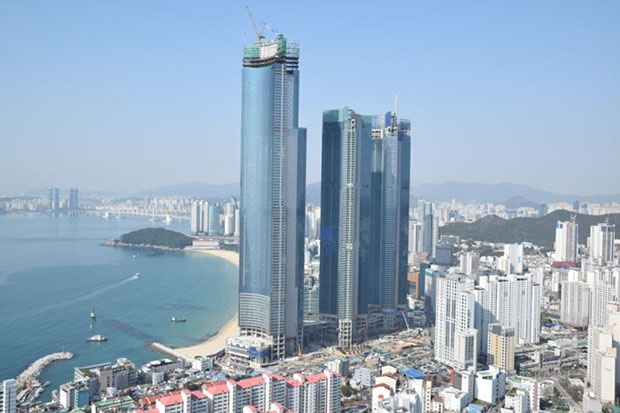 POSCO Engineering & Construction has completed the structural work for Haeundae LCT The Sharp, a high-rise apartment complex in Busan, three-and-one-half years after the buildings’ groundbreaking in October 2015.

The Landmark Tower will include a hotel that will be operated by Lotte Hotels & Resorts,  serviced apartments for long-term stays and an observatory.

The two 85-story residential towers will accommodate a total of 882 apartments, a shopping mall and a water park.

The Sharp requires 610,000 cubic meters of concrete, which will be used to build 6,500 apartments approximately 85 square meters in size. Construction will require 110,000 tons of steel, more than double that of Lotte World Tower.

“We will do our best to successfully complete the construction of the Haeundae LCT project and provide the best residential facility to our customers,” a POSCO E&C official said. “By doing so, we hope to stimulate the regional economy.”

For more on this story visit the Korean Times. LCT The Sharp Residential Tower A

LCT The Sharp Residential Tower B