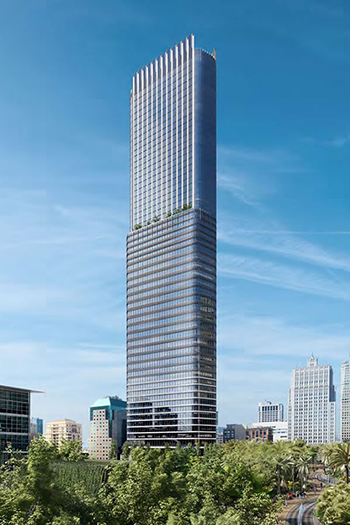 The Planning Commission in San Francisco has approved a new 61-story, 806-foot (246-meter) mixed-use tower at Transbay Center. Designed by Pelli Clarke Pelli Architects for a group led by developer Hines, if approved and built as currently planned, it would be the city’s fifth-tallest building.

Located at 542-550 Howard Street, the currently vacant site is known as Parcel F and sits across from the Transbay/Salesforce Transit Center and Salesforce Tower, both also designed by Pelli Clarke Pelli.

Anticipated to be the last major high-rise in the Transbay district, the proposal incorporates a 189-room hotel, nearly 300,000 square feet (28,000 square meters) of office space, and 165 market-rate condominium units. Additionally, the design calls for just under 9,000 square feet (840 square meters) of retail space and a 183-car below-grade garage with bike parking. The scheme also includes an elevated pedestrian bridge that would connect to the PWP Landscape Architecture-designed Salesforce Park atop the Transit Center.

Like its taller neighbor, this latest glassy, 935,000-square-foot (87,000-square-meter) building is not without challenges and controversy. The development has already been through several rounds of refinement since the initial design reveal in 2016, with a reduction in the number of hotel rooms and residential units, as well as the size of the proposed commercial and retail uses. The office space is already fully leased to Salesforce.

The proposal has also faced challenges related to an annual citywide cap on new office space and has been met with resistance from community groups in neighboring Chinatown, who are concerned about potential shadows cast over the popular Willie “Woo Woo” Wong Playground. Similarly, although the developers would foot the bill for 337 units of off-site affordable housing, seen as vital in a city with dramatic and seemingly intractable housing shortages, activists have expressed fears that these homes will not be affordable enough for area residents.

These setbacks did not deter the Planning Commission from approving the project, however, and now its final approval rests with the city’s Board of Supervisors.