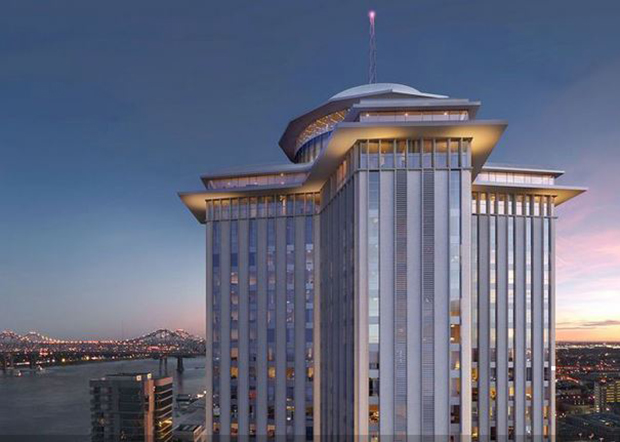 Construction has started on the complete transformation of a one of the most prominent buildings on the New Orleans skyline into a Four Seasons Hotel and Private Residences.

It was completed in 1968 as part of the celebration of the 250th anniversary of the city of New Orleans. It was an ambitious skyscraper at the time – its cruciform shape aligned to the four points of a compass and its New Formalist style creating a monumental presence on the New Orleans skyline. The rotating rooftop provided decades of entertainment and the best vantage points in the city.

“Two Canal” is listed on the National Register of Historic Places but has sat mostly empty since Hurricane Katrina hit New Orleans in 2005.

Most of the money being used to finance the project is from overseas, said Dick Friedman, CEO of Carpenter & Co., the project’s Boston-based master developer who is also a director of Four Seasons Hotels and Resorts. He described this as a remarkable accomplishment that represented confidence in the city’s leadership. “We will build this 50-year-old building for the next 100 years,” he said.

For more on this story visit HospitalityNet and The New Orleans Advocate.