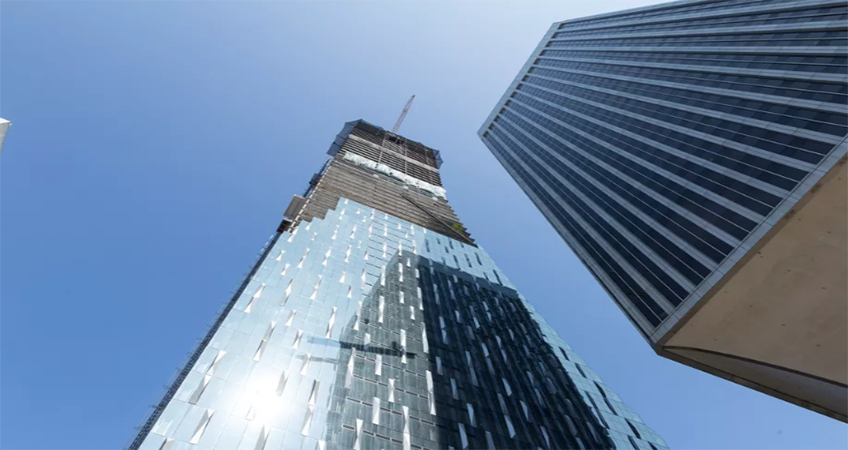 With construction topping off, Rainier Square is set to become the second-tallest skyscraper in the city of Seattle. The last steel beam was placed on the building at Fourth Avenue and Union Street on Thursday, 15 August, 2019, marking the structure reaching its full height.

The 58-story, 850-foot (259-meter) building, designed by architecture firm NBBJ and developed by Wright Runstad & Co., features a unique swoop shape meant to be complementary to the Minoru Yamasaki-designed Rainier Tower next door, which was built in 1977 and features a tapered base.

Inside, the space features offices, retail spaces, and residential units. The lower floors contain 80,000 square feet (7,432 square meters) of retail space, which will include a 20,000-square-foot (1,858-square-meter) PCC grocery store location and gym. About 722,000 square feet (67,076 square meters) of office space was originally going to be occupied by Amazon, until the retail giant opted to sub-lease.

“The last steel beam was placed on the building at Fourth Avenue and Union Street on Thursday, 15 August 2019, marking the structure reaching its full height.”

The top floors—41 through 58—will be luxury apartments, which the project team claims will be the highest in the city, with resident amenities on floors 39 and 40. A hotel will be tucked in between the new and old towers in a 12-story building.

In August 2018, the project was among those stalled by a 17-day strike and picket by International Union of Operating Engineers Local 302. After the union reached an agreement with Associated General Contractors of Washington, the building shot up at a rapid pace, going from the construction of the building’s basement to construction top-out in just 10 months.

The building is on track to be opened in August of 2020.

For more on this story, go to Curbed Seattle.