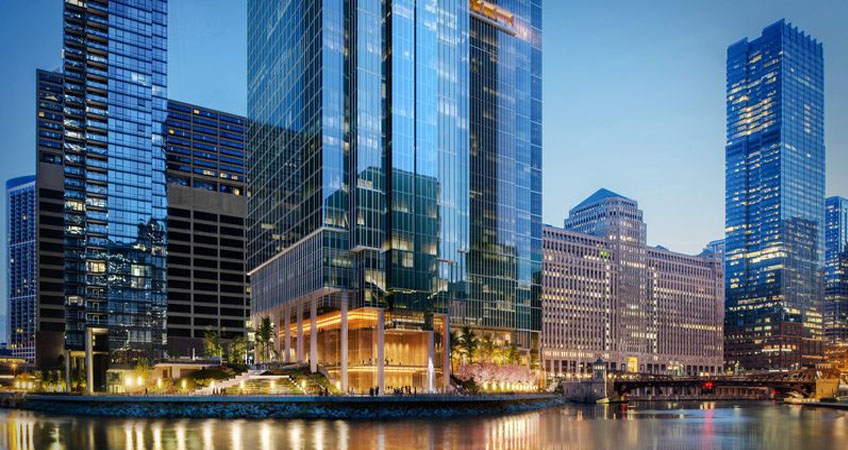 Salesforce on Friday, November 30, 2018 will announce plans to anchor a new riverfront skyscraper and add at least 1,000 jobs to its Chicago workforce in the next five years.

The San Francisco-based software firm has leased about 500,000 square feet (46,451 square meters) in the planned third and final tower in the Wolf Point development, said Elizabeth Pinkham, executive vice president of global real estate at Salesforce. The company also plans to put a Salesforce sign near the top of the 60-story building, which will rise on the north side of the Chicago River near the Merchandise Mart. The 1,000-square-foot (93-square-meter) exterior sign, a key aspect of the deal, required a new city ordinance.

Salesforce will occupy floors five through 23 and 55 through 57. As it has done in its towers in other cities, Salesforce plans to make its top floor a common space available for nonprofits and local education groups to use for free on weeknights and weekends.

The building, dubbed Salesforce Tower Chicago, will become the company’s regional headquarters. It is one of six towers Salesforce has announced, with the others in San Francisco, New York, London, Indianapolis and Atlanta. Company executives will announce the Chicago tower Friday morning.

“(The towers) really are kind of a manifestation of who we are,” Pinkham said. “We want these things to be really warm and engaging.”

Founded in San Francisco in 1999, Salesforce has grown to a global company with more than 32,000 employees. Its revenues were $3.39 billion in the third quarter, up 26 percent year over year. Salesforce makes software that its clients, such as Northbrook-based Allstate and Chicago-based United Airlines, can use to connect with their customers.

The company expects to pay $475 million over 17 years to lease the space, according to a filing with the Securities and Exchange Commission. The company could receive $41.5 million in tax credits from the state if it meets job creation and capital investment requirements.

Wolf Point, a site that has been owned by the Kennedy family for decades, is already the location of two residential towers — one completed and one under construction. The office tower, designed by architecture firm Pelli Clarke Pelli, will be the tallest of the three.

Developer Hines plans to begin construction of the 813-foot-tall (247-meter-tall) tower around Jan. 1, 2020, with plans to complete the 1.2 million-square-foot (111,483-square-meter) building by early 2023, said Greg Van Schaack, a senior managing director at Hines. The city already has approved zoning for the project.

Salesforce will have its name on a sign with 11-foot-tall (3.3-meter-tall) letters atop the east-facing part of the tower, Van Schaack said.

The company’s plans to move to Wolf Point were reported in August, and Mayor Rahm Emanuel in September introduced the ordinance allowing larger signs on downtown buildings. Since the addition of 20-foot-tall (6-meter-tall) letters spelling out “T-R-U-M-P” near the base of Trump International Hotel & Tower in 2014, the city had placed limits on signs.

Under the ordinance approved by the City Council in October, office tenants that occupy at least 350,000 square feet (32,516 square meters) or have at least 1,000 employees in a building are allowed to have exterior signage. The ordinance also allows signs to become larger, on a sliding scale, based on how high they are above the ground.

Salesforce opened its Chicago office in 2012 and has grown its workforce in the city to more than 1,400 people.

Pinkham expects employees will start moving into the Wolf Point tower in 2023. The company will continue finding space as needed to accommodate the growing employee count until the tower opens, Pinkham said.

“Growth does not stop,” she said. “That’s our biggest challenge these days … keeping out ahead of the growth.”

The company entered into a tax credit agreement with the state worth an estimated $41.5 million, with a requirement to add at least 1,000 new full-time jobs by the end of 2023. Salesforce expects the average annual salary of those employees will be $100,000. The agreement is through the EDGE program, short for Economic Development for a Growing Economy, which provides tax breaks for companies that promise to create jobs in Illinois. It also requires Salesforce to make $175 million in capital investments over the next 10 years.

Salesforce entered into the tax agreement in 2012 and amended it to include the new project, according to state documents. It has qualified to receive more than $10 million in tax credits to date.

Other companies have received larger incentive packages from the state. Amazon entered into an agreement in 2016 that could be worth an estimated $71.5 million, contingent upon creating 3,500 jobs at a Joliet warehouse. An agreement that same year with Rivian Automotive tied to the creation of 1,000 jobs in Normal could be worth more than $49 million, according to the Illinois Department of Commerce and Economic Opportunity.

The announcement comes just weeks after Chicago lost its bid for Amazon’s second headquarters, a project that would have brought tens of thousands of high-paying jobs to the city. The Salesforce tower and increasing employee count is a win for civic and business leaders working to boost Chicago’s standing as a tech city.

Technology is Chicago’s fastest-growing industry, Emanuel said in a statement.

“The city is home to one of the largest tech talent pools in the United States, and we are thrilled that Salesforce has made the commitment to further that growth,” he said. “As a strong civic-minded business, I look forward to partnering with Salesforce in our joint effort to build on Chicago’s reputation as a premier global city for technology, innovation and entrepreneurship.”

Salesforce was represented in the lease by brokers Brad Serot, Paul Reaumond and Mark Cassata of CBRE. The landlord was represented by Hines executives Jim Walsh, Brian Atkinson and Van Schaack.

Houston-based Hines and the Kennedy family are in talks with other companies to fill the remaining 700,000 square feet (65,032 square meters) of space in the tower, Van Schaack said. Plans for the skyscraper come amid a lengthy office development cycle that has added several new towers to the skyline, increasing competition for tenants willing to pay the highest rents in the city.

But Van Schaack said Wolf Point’s location, at the confluence of the North and South branches of the river, will make it competitive even if the economy slows.

“The Chicago River is increasingly a powerful magnet for companies,” he said.

Unlike many tech companies that prefer older buildings or sprawling campuses, Salesforce is known to seek naming rights and signage on new skyscrapers. In January, Salesforce moved its headquarters into the 61-story Salesforce Tower in San Francisco. At 1,070 feet (326 meters), it is the second-tallest building west of the Mississippi River.

Salesforce also has developed a strategy for investing in the areas surrounding its towers. The company does not build cafeterias inside its buildings to encourage employees to go spend money at nearby restaurants or coffee shops. Rather than building corporate gyms in the buildings, it gives employees stipends for outside gym memberships.

The company also has allowed nonprofits and other groups to use the top occupied floors in its other towers for free. Salesforce calls it the “Ohana Floor,” deploying a Hawaiian word meaning family.

With a heightened presence in Chicago, Salesforce plans to increase its philanthropic work in the city as well, Pinkham said. Local employees plan to deliver 40,000 volunteer hours in 2019, the company said. Salesforce is expected to announce Friday that it recently granted $500,000 to workforce development organizations Year Up, Genesys Works and i.c. Stars. It also granted $650,000 to Chicago Public Schools.