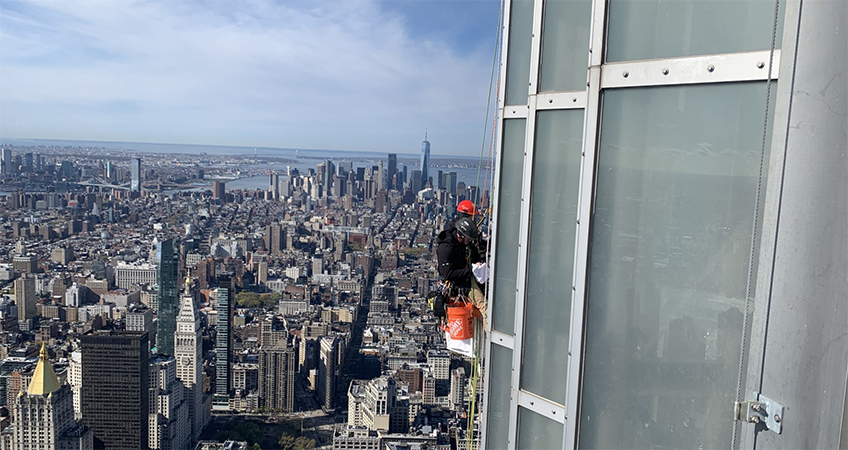 New York City’s skyline is forever adapting, thrusting ever higher upwards as a jostling amalgam of evolving styles and forms. Although surpassed in height by more recent projects such as SHoP Architect’s 111 57th Street and KPF’s One Vanderbilt, Shreve, Lamb & Harmon’s Empire State Building remains the city’s penultimate skyscraper and icon from the art deco era. The mooring mast, or spire, that rests atop the tower’s heavy and stepped masonry massing is perhaps the project’s most iconic feature and is nearing the completion of a comprehensive restoration to bring it back to its original luster, led by master riggers Cole NYC and CANY Architecture and Engineering and real estate services company JLL and the Empire State Realty Trust.

The Empire State Building, as one of the tallest and most centrally located towers within New York City, proved a more than an ideal site for transmission and broadcast equipment. Unfortunately, that role as an infrastructural hub for communications led to the clustered and haphazard installation of equipment across the mooring mast—an unsightly arrangement that hindered the spire’s long-term maintenance.

“In order to establish the required scope of restoration work, CANY performed both historical research and onsite assessment: original assemblies and the evolution of the mast as a communications tower were thoroughly explored,” said the team, consisting of CANY executive director Jarrett Huddleston and project manager Julie Foster, as well as JLL projects manager Richard Hauser, and Empire State Realty Trust director of design and construction Peter Sjolund. “The exterior was thoroughly assessed, photographed, and videoed, and deficiencies and instances of past penetrations were organized by type and location and a systematic plan developed for restoring the original historic fabric and silhouette of the sculptural Art Deco mast.”

The Cole NYC team, equipped with project elevation drawings as well as repair details documenting conditions across the spire, such as plate and casting repairs and dunnage penetrations, got to work setting their industrial rope access lines to climb and rappel across the mooring mast. In total, approximately 44,000 pounds (19,958 kilograms) of equipment were removed from the spire; detritus included a dozen antenna, and their network of ladders, railings, and platforms, as well as 1,500 abandoned plates and miscellaneous broadcasting equipment. Over 200 sandblasted aluminum plates, ranging in size from 4 by 4 feet (1.2 by 1.2 meters) to 4 by 6 feet (1.2 by 1.8 meters) were installed across the spire. Careful attention was paid to the fins found at the four corners of the spire, and each was 3D scanned to facilitate the production of accurate molds prior to fabrication by Allen Architectural Metals in Alabama.

While construction via industrial rope access is a strictly controlled practice grounded in training and certification, there were, of course, obstacles to facade repair and installation at the summit of the Empire State Building. Of those challenges, the weather proved the most daunting: A five-mile-per-hour breeze at street level could translate to 25 miles per hour (40 kilometers per hour) gusts on the 103rd floor. On top of potentially high wind speeds, the construction team also had to contend with the skyscraper’s microclimate of frequent dense clouds, rain, and ice.

Notably, the entire construction schedule occurred at night to allow for daytime access to the observation deck. “While the Project Team operated in a highly organized and effective manner and are adept at the use of augmented lighting and headlamps, the necessity for reestablishing rigging, the time required for positioning and the logistics of removals and repairs placed limitations on the work that necessitated creativity and persistence to guarantee success.”

For more on this story, go to The Architect's Newspaper.