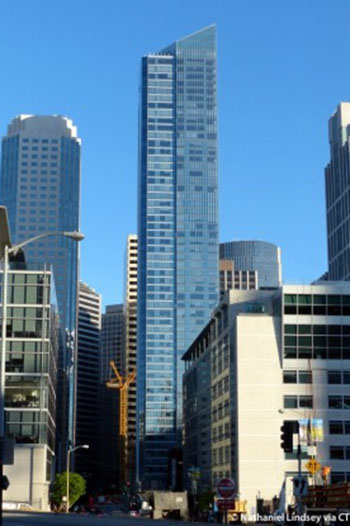 The suit alleged that the building was constructed on mud and sand, not bedrock located deeper in the ground.
04 September 2019 San Francisco, United States

A settlement has been tentatively reached in a lawsuit involving tenants of the sinking Millennium Tower in downtown San Francisco, an attorney representing the luxury apartment owners said on September 4.

The lawsuit was filed in San Francisco Superior Court back in February 2017 on behalf of more than 200 homeowners, and named the Transbay Joint Powers Authority (TJPA) and developer Millennium Partners as defendants.

According to attorney Niall McCarthy, who represented the tenants, with the settlement, individual unit owners will be compensated for the loss in the value to their apartments, although he said he couldn’t reveal the exact amount.

The suit alleged that the building was constructed on mud and sand, not bedrock located deeper in the ground, and that developers knew about the sinking before the apartments went up for sale. Additionally, the suit alleged that further sinking was caused after construction began on the neighboring Salesforce Transit Center.

McCarthy added that the suit could also serve as a lesson for future developers.

“This litigation exposed some major planning and building defects and will avoid any disasters in the future,” he said.

In a statement, TJPA Executive Director Mark Zabaneh said that although attorneys are working on a settlement, the agreement isn’t official.

“The many parties to the Millennium Tower litigation are working on a settlement with the assistance of a mediation team. A settlement agreement has not been finalized,” Zabaneh said.

Mission Street Development, a subsidiary of Millennium Partners, said in a statement it was “pleased” that an agreement is in the works.

“The settlement would help pay for the fixes, like a perimeter pile upgrade, which the homeowners’ association had sought in one of many separate lawsuits against the developer.”

Additionally, the firm said the settlement would help pay for the fixes, like a perimeter pile upgrade, which the Millennium Tower Association had sought in one of many separate lawsuits against the developer.

“The agreement in principle will provide homeowners with the funding needed to implement the perimeter pile upgrade . . . to address the impacts on the building from nearby construction activities and soil conditions, and will be designed to protect it from negative impacts in the future,” the firm said.

The settlement “will also set the framework for a final settlement and release of all claims related to the condition of the Millennium Tower,” the developers said.

“Mission Street Development has made clear from the beginning that its top priority has been to address and resolve the conditions that caused the building’s past problems. The agreement announced today is consistent with that priority and assures that the building will continue to set the standard for urban living in San Francisco,” the firm said.

For more on this story go to KPIX.