Renovations to Indianapolis High-Rise Will Replace its Golden Façade 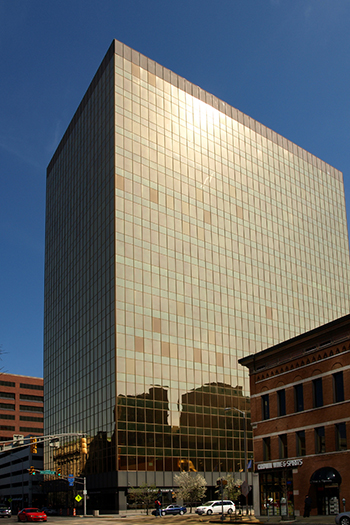 After purchasing the 20-story office tower in 2019, Gershman Partners and Citimark announced it would modernize the gold façade with a transparent, all-glass curtain wall.
04 November 2019 Indianapolis, United States

Known as the Gold Building, Market Square Center in downtown Indianapolis is set to lose its distinct luster. After purchasing the 20-story office tower in 2019, local developers Gershman Partners and Citimark announced they would modernize the façade with a transparent, all-glass curtain wall, effectively stripping the 44-year-old building of its longtime identity.

Located at 151 North Delaware Street, Market Square Center is one of the shiniest buildings in Indiana’s capital city. The boxy modernist structure was designed by local firm Wright, Porteous & Lowe in the mid-1970s and features a reflective gold exterior wrapped around 420,500 square feet (39,000 square meters) of office space. Over the last several years, the Gold Building and its neighbor, Two Market Square Center, have struggled under many changes in ownership and the site has proved too costly to maintain.

Set in the city’s Market East District, a burgeoning neighborhood of downtown Indianapolis, the project sits next to the popular City Market Food Hall and along an eight-mile-long walking and biking path known as Cultural Trail. Over the last five years, the area has received significant commercial and retail investments and the developers hope the Gold Building will find a new life in the center of the scene. In a March 2019 interview with the Indianapolis Business Journal, Eric Gershman, principal of Gershman Partners, said his team aims to connect the two buildings more seamlessly with the neighborhood below by activating them at street level and updating the interiors to boost occupancy.

Newly released renderings reveal that Market Square Center will soon feature a transparent façade and public space at the ground level. Per Citimark’s portfolio, not only will the façade undergo a significant change, but the interiors will as well. The lobbies, restrooms, and office tenant spaces will be upgraded with Class A finishes, and the first floor will include room for a restaurant, bar, and retail.

The redevelopment has received both criticism and praise from locals since it was unveiled in May 2019. Some are sad to see the gold glass go, while others don’t mind and claim the glare produced by the Gold Building has made it unbearable to drive by. It’s unclear when construction will begin on the renovation, or when the building will reopen to future tenants.