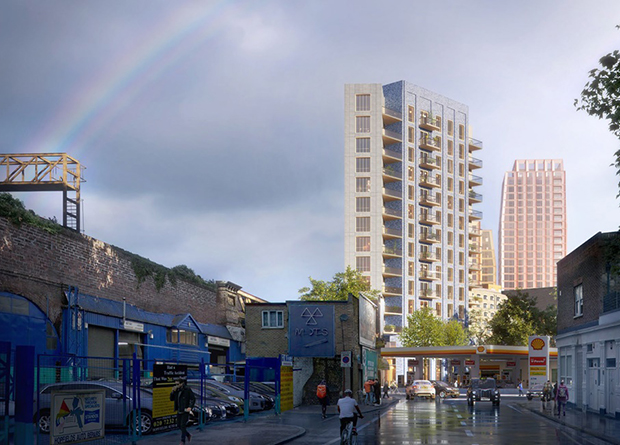 Kohn Pedersen Fox’s proposal for a £500 million (US$653 million) redevelopment of a former biscuit factory site in Bermondsey looks set to be thrown out because of its lack of affordable housing.

Southwark councilors will vote next week (6 February, 2019) on whether to grant permission for the major Grosvenor-backed scheme for the 6.2-hectare site near Bermondsey tube station.

The so-called Bermondsey Project would provide up to 1,342 private rented sector (PRS) flats, plus 10,000 square meters of office space, retail and leisure space and a replacement secondary school, all in buildings up to 28 stories high.
But planners have said that despite “lengthy negotiations” stretching back to 2017, the applicant had failed to reach an agreement on “critical issues” including the affordable housing and the quality of some of the homes.

According to the report, the developer’s affordable housing offer would be provided in the form of discounted rent, with just over a quarter (27.5 percent) of the proposed units let at 25 percent below market rents.

The council argues this misses its policy target of 35 percent affordable, and the discounted units would “not realistically” allow for any significant provision of social rent or London Living rent units.

The proposals generated a large volume of objections, with 115 people raising the issue of affordable housing and 36 concerned about the scheme’s height and design.

An objection sent by a councilor in a neighboring ward said: ‘The development will be on the doorstep of neighborhoods that are among the most deprived in the country, and the borough has a desperate need for social housing. There can be no justification for approving this application and it should not be considered until there is a policy-compliant mix of affordable housing.’The hybrid application includes detailed permission for 16 new buildings, including a proposed 600-place secondary school by Cottrell & Vermeulen Architecture at the heart of the neighborhood.

The lengthy pre-application process has seen a number of minor amendments submitted by the applicant, including reduction in the height of one of the buildings.

But the changes have failed to win over planners. Stating reasons for refusal, the borough’s planning officers said: “The development fails to provide the maximum reasonable amount of affordable housing, and the affordable housing offered would be at a cost which would not be affordable to those in greatest housing need.”

According to the report, the development also “does not provide an exemplary quality of accommodation for its future residents to combat the potential negative impacts of high-density living.”

Grosvenor appointed KPF as lead architect on the project following a review of its design team, effectively replacing Karakusevic Carson, which had been appointed to that role in 2015 (see AJ 29.09.15).

A spokesperson for Grosvenor said: “Our proposals are for a neighborhood that is accessible to the growing majority of Londoners who simply cannot afford to buy, do not qualify for social housing and want the advantages of a secure, professionally managed home to rent.

’This includes Southwark’s many health, education, public order and fire service workers who want to, and can through our proposals, live close to where they work.”

A decision will be made on the development next Wednesday (6 February, 2019).

For more on this story, go to Architect’s Journal (subscription required.)