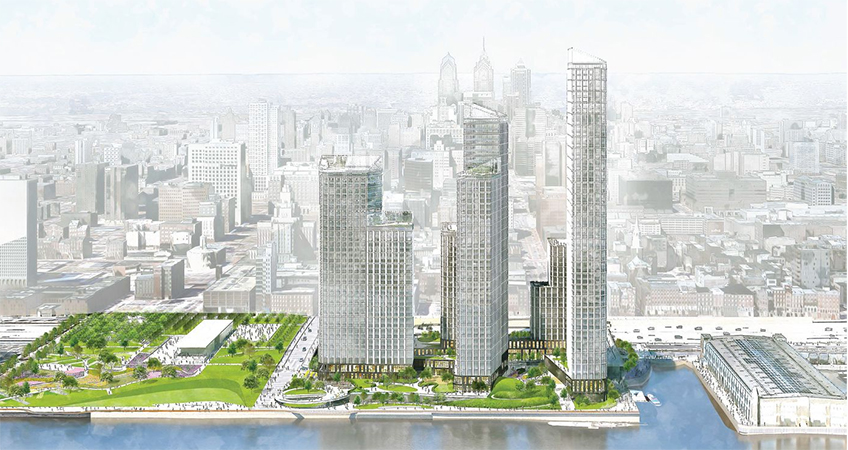 Twelve new towers of homes, shops, and offices on either side of a park being planned over a highway in Philadelphia have been approved by a key waterfront board.
14 September 2020, Philadelphia, United States

The Durst Organization of New York has been selected to redevelop Penn’s Landing, ending efforts by the Philadelphia 76ers to build themselves a new basketball arena there. Under a US$2.2 billion plan approved Wednesday, 9 September 2020, by the key waterfront board, the family-run development group would put up 12 new towers of homes, shops, and offices on either side of the four-acre (1.6-hectare) park being planned over Interstate 95, between Chestnut and Walnut Streets.

The decision by the board of the Delaware River Waterfront Corp. is the latest attempt in a decades-long effort to create a riverfront for Philadelphia, which the highway cleaved from the city center more than a half-century ago. In choosing Durst’s 3.5 million-square-foot proposal (325,000 square meter), the board rejected a plan pushed by the 76ers that the team valued at US$4 billion, but that would have required a big tax break. Two other bidders had also included some form of public support in versions of their plans.

Mayor Jim Kenney said in a statement later Wednesday that he welcomed Durst’s plan to complete its project “without the need for a taxpayer subsidy.”

“The Durst Organization’s thoughtful proposal prioritized minority participation and economic impact,” Kenney said. “This is a very large-scale project that will have a great impact on the waterfront for years to come.”

Of the four proposals reviewed for the site, Durst’s was also most consistent with the Master Plan for the Central Delaware, which DRWC has followed since its drafting in the mid-2000s to encourage development that enables pedestrian access to the river, said Alan Hoffmann, who chairs the agency’s board.

Under the plan, the government-affiliated nonprofit has invested heavily in public plazas, bike trails, and other communal spaces that are meant to draw private development dollars to the area.

The most significant of those investments is the US$225 million park over I-95, construction of which is scheduled to begin next year.

Durst’s plan would see the construction of six high-rise buildings among grassy plazas along the waterfront between Market and Chestnut Streets, north of a 12-acre (4.86 hectacre) planned park spanning I-95.

The buildings would house about 1,800 apartment or condo units, 225 hotel rooms, and 94,000 square feet (8,732 square meters) of space for offices of the waterfront agency, a supermarket, a preschool, and other shops and restaurants.

Six shorter towers with about 550 residential units and 26,500 square feet (2,461 square meters) of commercial space would go up to the south, between Spruce and Lombard Streets.

The buildings would rise in four phases over about nine years.

Other major selling points for the Durst plan were that it would begin paying DRWC rent on the property soon after it begins earning revenue, giving the agency cash to fund and operate its public amenities.

The fact that Durst said its plan would not require public support also counted in its favor, Hankowsky said. The public has already made a contribution toward waterfront development through the parks and trails there that have been financed by taxpayers and philanthropists, he said.

“This proposal will take that public investment and put private investment up against it,” he said.For its part, Durst’s proposal includes a commitment to give a minority-owned development firm an ownership stake of up to 20 percent in its Penn’s Landing project.

It also promised that up to 40 percent of its staff during construction and operation would be members of minority groups and that it would contract with a third-party consultant to track its adherence to that commitment.

The plan will support more than 28,000 construction and construction-related jobs, resulting in nearly US$2 billion of new wages for workers, Durst said. This activity will generate additional tax revenues of US$62 million for the city and US$113 million for the state, it said.

Once built and operating, the development will sustain 1,850 permanent jobs, and will generate annual tax revenues to the city of US$35 million, and to the commonwealth of US$21 million, Durst said.

The selection process for the site began last fall, when DRWC announced that it was seeking developers to construct residential buildings with ground-floor shops and restaurants north and south of the planned freeway cap.

DRWC president Joe Forkin said at Wednesday’s board meeting that the agency will begin a community engagement process on the Durst proposal after a formal agreement with Durst is signed.

For more on this story, go to The Philadelphia Inquirer.