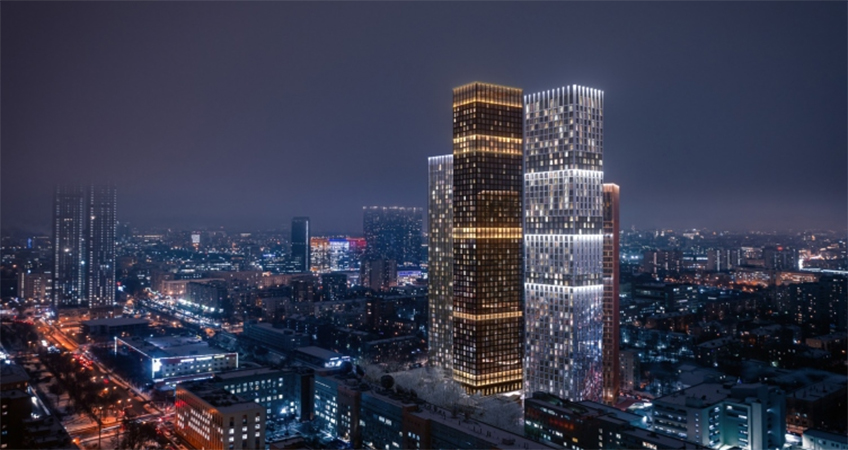 Symphony 34 was developed by Kleinewelt Аrchitekten at the commission from MR Group. Its compact site, 1.4 hectares, is situated in the north of Moscow, near Dmitrovskaya metro station, not far away from two other high-rise housing projects commissioned by the same developer: D1, designed by Kamen Architects, which is being finished a mere 500 meters east of the metro station, and Savelovsky City, designed by SPEECH, which is plainly seen a bit farther away, behind the Dmitro Highway.

Symphony 34 is one of the most recent high-rise projects of MR Group: the closed-door competition, which involved three architectural companies, took place in March 2020. Kleinewelt Аrchitekten won the competition and immediately began working on the project.

The team of Sergey and Nikolai Pereslegins and George Trofimov offered the developer several versions of the future complex. As the chief architect of the project Xenia Vorobyeva shared, in all of the versions the architects aimed at creating a wow-effect by finding flashy solutions. Eventually, the developer opted for the version, which, as Xenia shares, the architects themselves liked best of all – the one with buildings of different height and expressive design of the facades.

The architects had a task of forming a full-fledged living environment within a fully developed urban infrastructure, thoroughly organized yard space, extra public functions, and great views of the city. The towers will command panoramas of the Moscow City business center, Timiryazevsky park, and Ostankino TV tower.

The land site is situated next to the D2 line of Moscow Central High-Speed Diameter, which separates Savelovsky and Timiryazevsky districts; the Dmitrovskaya station of Moscow Central High-Speed Diameter will also be the closest entrance to the metro. Currently, the site is a small piece of industrial warehouse estate, the kind that usually alternates with self-sufficient blocks of five-story houses.

The arrangement of the four towers that make up Symphony 34 was conditioned by the proximity of the railroad line, views from the windows, but, above all, by the insolation requirements. According to Xenia Vorobyeva, the architects spent a lot of time moving the volumes and spinning them around their axes in order to let as much natural light as possible into the apartments—it was the insolation that determined the delicate turns of the towers in respect to one another, and their slight “waltzing” around the central Building A, the main high-rise centerpiece, proudly standing almost in the very center of the site.

Making a composition of four towers is more difficult than two or three. Kleinewelt Аrchitekten took the path of the optimum balance of unity and diversity: the plans of all the buildings are based on the common column pitch of 3.3 meters, also reflected in the common “square” façade module. The unity is also enhanced by the materials—aluminum and glass (the apartment windows are no less than 2.1 meters high). The base spot of each tower is also of the same size. However, despite the unity of the mentioned parameters, each tower is endowed with a clear individual imagery: the color, the façade design, and the height of the towers are different. Hence, it comes as no surprise that all the four buildings received poetic names.

The tallest, Graphite, has 54 floors in it, its height—190 meters—meeting the height restrictions of the site. The tower was named Graphite after its pitch-black aluminum facets of the floor-by-floor panoramic stained glass windows 2.6-by-2.6 meters. The black color of the faceting pattern is echoed by polarized glass (whose tint, of course, works only on the outside, without blacking out the interiors of the apartments). The tallest tower, placed, as we remember, in the center of the composition, looks like a gigantic “graphic rod," figuratively conveying the common words that skyscrapers both reflect and form the energy of a megalopolis. The four towers are as good as a nuclear power plant that generates the big city drive and processes its energy at the same time. The black skyscraper becomes a figurative paraphrase of the nuclear reactor graphite rod, the “moderator” of the city energy – visual in this specific case.

The second tallest tower, 49 stories high, is called Crystal. It is situated west of the center, and is turned to the central skyscraper at a 90-degree angle. It looks as though it was contradicting the main tower in every conceivable respect: while the black volume is smooth, Crystal is light and has a lot of ribs – yet at the same time it also looks like the main building’s Alter Ego in terms of height and the smooth glass “belts”, which also divide the volume into a few unequal parts, albeit in different proportions.

The volume of Crystal is elegant and silvery; it is composed of triangular bay windows, one half being tinted glass in the part between the floors, the other half being metallic surface. The bay windows are turned in such a way as to command the best views and let in as much as possible natural light. Everything works towards creating a “crystal” image with a multitude of facets and glitter of reflected light – and at the same time it all looks like a neat modernist pleating.

The two other towers of a smaller height could be interpreted as children of this imposing couple – not as babies but rather as teenagers. Tower C, called Silver—a 43-story volume in the eastern part—responds to the Crystal high-rise.

The smallest of the four towers—the copper 36-story tower Siena—is rotated at a 45-degree angle, facing the brick block buildings, with which it echoes with a reddish hue, which can well be compared with Terra di Siena, explaining the name of the building.

The buildings will feature all types of apartments, ranging from studios to four-room apartments, as well as penthouses from 129 to 162 square meters, which will occupy the top floors in three towers—on the 54th, 49th, 43rd floors. The bottom floors will host retail. There will also be a two-level underground parking garage.

The complex was named in honor of the famous symphony by Mozart. The polyphony and richness of the sound of Mozart’s symphony inspired the architects to create this grand-scale project. Each building here has a unique “voice” of its own; each volume contains a gamut of emotions. Different in appearance and in character, they are nonetheless, resonant with one another and with the city.

The completion of its implementation is scheduled for 2024.

For more on this story, go to Archi Ru.