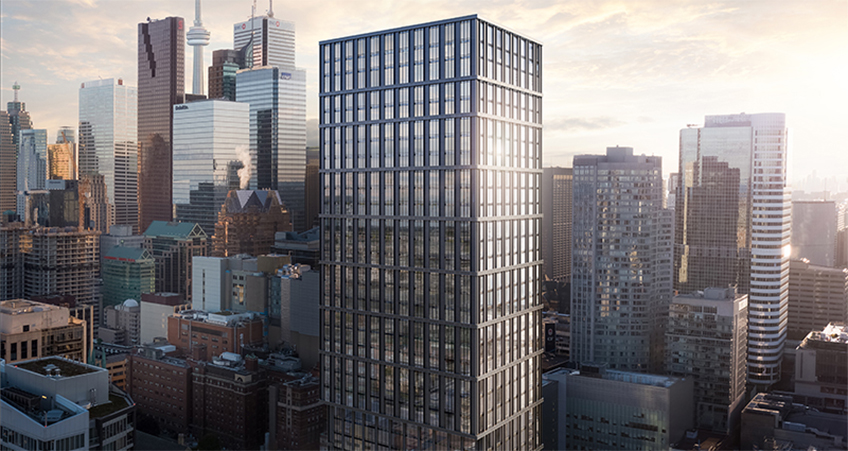 A condominium development coming to 199 Church Street south of Dundas in downtown Toronto could be a bit taller than initially approved. The IBI Group-designed development for CentreCourt and Parallax Developments was initially proposed seeking 37 stories in early 2019, and roughly a year and a half later, the plans have been increased to 39 stories in a mid-August 2020 submission to the City.

199 Church was initially proposed at a height of 121.25 meters in the original 37-story submission. That has now increased to 129.5 meters but despite the height increase, the updated gross floor area (GFA) of 28,000 square meters actually represents a sizeable decrease from the original proposal's 31,200 square meters GFA. Other internal changes since the first proposal include the increase in unit count to 484 from the initial 478. While the revised plan was submitted this summer, the changes have been hinted at throughout the project's marketing, such as in renderings like the one below which show the tower depicted as a 39-storey plan.

The recent planning submission also includes a closer look at the cladding materials planned for the tower which include a window wall system with back-painted glass spandrels framed in charcoal-toned mullions and surrounded in a grid of "black tar" toned metal panels in three-level sections that articulate the tower volume. A cantilever seven levels above the preserved heritage components is to feature a light bamboo-colored longboard soffit for its underside.

Another feature detailed in the documents is a public art mural planned for the rear of the building, described as an "interlayered glass" treatment. First described in the August, 2019 submission, the mural would animate the building's Dalhousie Street frontage.