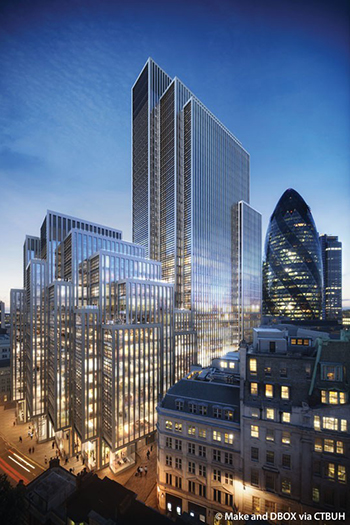 M&G Prudential laid down a bet on London’s future as an international financial hub after Brexit, agreeing to bankroll the construction of an office complex that will be one of the largest in the United Kingdom.

The asset manager is investing £875 million (US$1.1 billion) to purchase land at 40 Leadenhall Street and build the office project that has been dubbed “Gotham City”, according to a company statement on 7 October 2019. It acquired the site from Alberta Investment Management Corp. and Nuveen Real Estate, which will continue as development manager.

“London’s commercial property market currently offers good value relative to other capital cities such as Paris and Tokyo, partly due to Brexit-related uncertainty,” Tony Brown, global head of M&G Real Estate, said in the statement. “As there are a limited number of developments under way in London, we expect high-quality office space like this with an emphasis on green credentials and employee well-being to be in demand from occupiers when the scheme is completed in four years.”

The Nuveen-led venture bought most of the plot out of administration for about £190 million (US$234 million) in 2011 and subsequently gained approvals for two towers of 14 and 34 stories. The project will have 905,000 square feet (84,000 square meters) of office space.