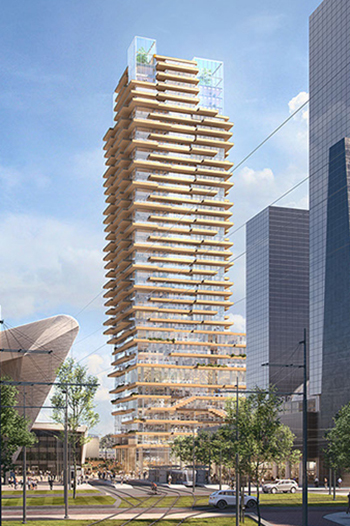 The 37-story scheme is being billed as the tallest hybrid timber structure in the Netherlands and will feature significant amounts of reused and recycled materials as well as rainwater collection.
07 January 2020 Rotterdam, Netherlands

PLP Architecture has seen off UNStudio and Group A to win a competition for a 140-meter-tall office and apartment tower in Rotterdam, Netherlands.

The practice’s proposal, named the Tree House, for the Delftseplein site next to the Rotterdam Centraal rail station, features a hybrid structure, with a concrete podium and core supporting a timber frame.

The 37-story scheme is being billed as the tallest hybrid timber structure in the Netherlands and will feature significant amounts of reused and recycled materials as well as rainwater collection. The tower will be topped by three greenhouses filled with trees and gardens.

Modeled on the ecosystem of a tree, the €160 million (US$178 million) project will provide 275 dwelling units, 30 percent of which will be reserved for the mid-market sector. A seventh-floor restaurant, 15,000 square meters of office space aimed at tech companies, and separate co-working areas are also planned to be included.

PLP Architecture teamed up with Dutch developer Provast on the successful tender bid. Prov will now buy the plot between the Gebouw Delftse Poort complex and Central Post from the municipality of Rotterdam to Dutch, the contest organizer.

The project team is working with De Dépendance, Rotterdam’s platform for city culture and public debate, to create “socially relevant programming” within the skyscraper.

PLP partner Ron Bakker described the scheme as an “innovative, sustainable, mixed-use tower with a hybrid timber structure, which would create a new typology for future cities.”

Despite its height, the tower will be shorter than OMA’s 151-meter-tall De Rotterdam and Dam & Partners Architecten’s 165-meter Maastoren. Construction is expected to begin in 2021 with completion planned for 2024.