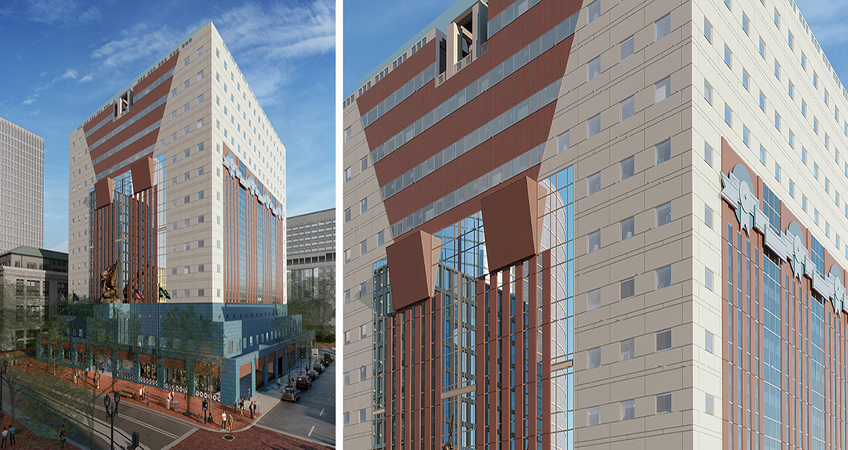 An audit by the City of Portland, Oregon, has found that the DLR Group’s renovation of the Michael Graves–designed Portland Building is over budget and, once complete, will cause the building to lose its historic landmark status.

The renovation began last year as an alternative to scrapping the postmodern Portland tower, which desperately needed waterproofing, seismic, and efficiency upgrades. The plan to overhaul the 360,000 square foot (33,400 square meters) building eventually ballooned to US$195 million as DLR Group opted to reskin the tower with a unitized aluminum rainscreen designed to imitate the original facade. Because of budget constraints when the building was originally constructed in 1982, Michael Graves opted to support the building using a cheaper exterior concrete wall, but poor workmanship led to water infiltration issues. DLR Group will also replace the dark windows, value engineered in for insulation, with lighter insulated glass.

However, according to the City of Portland’s audit of the renovation, a follow-up to an initial risk analysis report, the budget has increased to US$214 million. It was also revealed that once the project is complete, the building will be removed from the National Register of Historic Places.

“It was revealed that once the project is complete, the building will be removed from the National Register of Historic Places.”

According to the audit, “As a part of the local Historic Landmarks Commission reviews in June 2017, the National Parks Service and the State Historic Preservation Office alerted the City that it would remove the Portland Building from the register if the City pursued the proposed exterior design to address water leaks.” The city will have to enter into a mitigation agreement with the State Historic Preservation Office as well to offset the delisting, although what that entails is uncertain at this point.

If the Portland Building is removed from the register as expected, the city will have the option of designating it a local landmark instead.

The report notes that as the budget grew, the project team decided to scale back the renovation’s scope. While DLR Group is on track to meet the minimum waterproofing and seismic requirements, and to replace most of the building’s heating and cooling systems, several elements were eliminated from the original US$195 million budget. The audit cites “furnishings, technology equipment, as well as tenant improvements for parts of the building that would otherwise be left unfinished —two and a half floors of offices, and the childcare center on the first floor” as having been “spun off” into separate projects, which accounts for the 10% cost increase over what was originally proposed.

However, despite the fervor, Michael Graves Architecture is in favor of the changes. In a letter from 2017, the studio stood behind DLR Group’s reskinning, noting that several of their changes, including the decision to change the glass from black to clear, were part of the original design but were cut due to budgetary constraints.

Work on the retrofit is currently ongoing and is expected to be completed sometime in 2020.