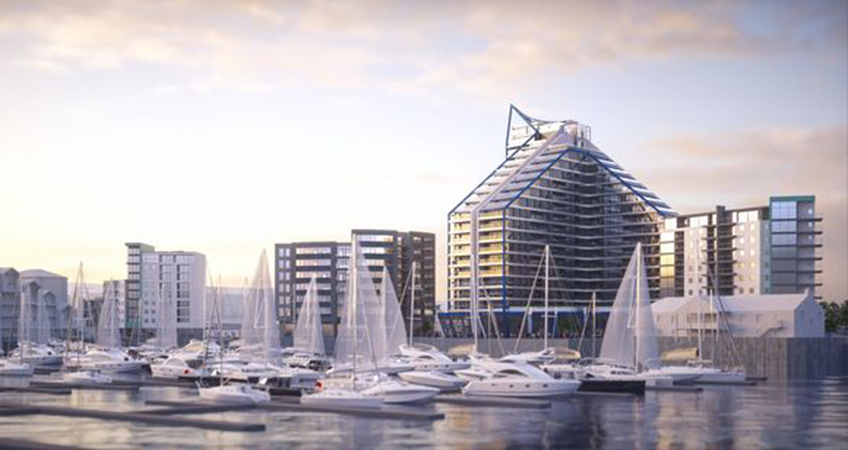 The mixed-use development is planned to be constructed by late 2022 and contain 170 apartments.
03 October 2019, Plymouth, United Kingdom

New images have been released of how the Sugar Quay development will appear when it towers above Sutton Harbour.

They show a mixed-use block 20 floors high, making it one of the tallest towers in Plymouth. It is planned to be constructed by late 2022 and would contain 170 apartments.

Sugar Quay is just one of several developments that Sutton Harbour Group (SHG), which also owns the long lease on the former Plymouth City Airport site, has in the pipeline for the Plymouth waterfront.

In 2018 SHG raised £3 million (US$3.7 million) from shareholders to kick-start development of the Sugar Quay and, a stone’s throw away on the other side of the existing Salt Quay House, Harbour Arch Quay.

The AIM-listed company said it wants to start work on the nine-story apartment block in late 2019, with all 14 apartments being marketed off-plan. The building could be completed in just over a year.

A recent statement from SHG to the Stock Exchange said, “During the summer months the company has made good progress with pre-construction preparations for two consented developments at Sutton Harbour.

“Financing of the smaller Harbour Arch Quay building has been arranged, and construction is expected to start before the end of the calendar year, along with the launching of the marketing of the 14 apartments. The building should take just over a year to complete.

“The larger Sugar Quay scheme is proceeding to construction drawings, bidding by construction contractors and scheme financing, with an anticipated start in Q1 of 2020 of the approximate 30-month build program.”

The statement added, “The company continues to upgrade its existing capital infrastructure and works are currently underway to construct a new fuel delivery system at Plymouth Fisheries. This capital investment of approximately £800,000 (US$990,000) has qualified for 50 percent grant funding.

“To improve public access and events space at Sutton Harbour Marina, in addition to creating additional larger berths in time for the summer of 2020, marine licensing applications have been submitted to enable the installation of some new additional pontoons.”

For more on this story, go to the Plymouth Herald.