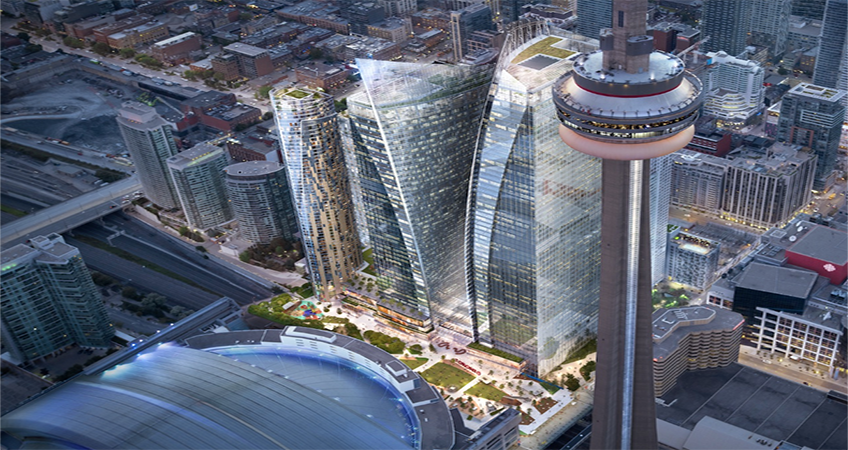 Almost seven years ago, developer Oxford Properties Group proposed a massive redevelopment of the Metro Toronto Convention Center and buildings to the west along Front Street, calling for a mixed-use complex, including multiple towers and a casino.

The casino proposal was turned away by City Council, leading the project known as Oxford Place to be shelved for later reassessment. After years of speculation, information that a new plan was in the works began to emerge earlier this year, with details now being revealed on the project to be known as Union Park. With this unveiling, the plans are shown to be exclusively placed on the south side of Front Street between John Street and Blue Jays Way, and do not touch the Convention Center at this point.

The updated plan features a CAD$3.5 billion, 4.3 million-square-foot (399,483-square-meter), mixed-use complex on a 4-acre (1.6-hectare) site bounded by Blue Jays Way, the John Street bridge, Front Street, and the northern edge of the Union Station rail corridor. The site is currently home to two office buildings, at 315 and 325 Front Street West. This plot of land theoretically represents the first in a multi-phased plan that would eventually include redevelopment of the convention center and associated buildings to the east, with a total site area of 11 acres (4.6 hectares).

In a prepared release, Eric Plesman, Executive Vice President of North America, Oxford Properties, stated: “This is a transformational project in one of the most exciting development nodes in Toronto. Befitting its status as one of the largest redevelopment projects in North America, and the largest in Toronto’s history, Union Park will feature world-class design from a globally-renowned architecture team. Our goal at Oxford is to connect people to exceptional places, so we are creating an ambitious project that adds to Toronto’s ongoing evolution as a world-class city to live and work in.”

Designed by Pelli Clarke Pelli Architects and Toronto-based Adamson Associates Architects, this initial phase would contain four towers, including a 1.5-million-square-foot (139,354-square-meter) and a 1.8-million-square-foot (167,225-square-meter) office tower with respective heights of 48 and 58 stories, as well as 44 and 54-story residential towers. A total of 800 rental apartments is proposed, with 200,000 square feet (18,580 square meters) of retail space placed on the ground level. The office component is set to include multiple 100,000-square-foot (9,290-square-meter) spaces split between the office towers and linked via an atrium, with a hope to attract global tenants who require large, modular spaces.

“Union Park will be a world-class, mixed-use project that will leverage the experience we have garnered through developing and owning some of the best office, retail, and residential properties across the globe.”

On its south side, the project would create a new two-acre (0.81-hectare) public space decked over a stretch of rail corridor from Blue Jays Way to the John Street Bridge. Renderings depict a concept for this public space by OJB Landscape Architecture of Houston, Texas, that would include a mix of softscaping and hardscaping, as well as various distinct spaces designed to bridge the cityscape over the rail corridor. The existing Isabella Valancy Crawford park, where the John Street bridge touches down to Front Street, would be retained for a total of 3 acres (1.2 hectares) of park space.

In the prepared release, Mark Cote, Head of Development, Canada, Oxford Properties noted: “Union Park will be a world-class, mixed-use project that will leverage the experience we have garnered through developing and owning some of the best office, retail, and residential properties across the globe. The new park is a unique opportunity to create a true city-building project that benefits our city for generations to come. It perfectly complements the City’s own Rail Deck Park plans by expanding it to the east and, together, we can create a landmark communal space for Torontonians and visitors from around the world to enjoy. Our plans are at a very early stage, but we look forward to working with the multiple stakeholders and adjacent land owners involved to make this opportunity possible for the city.”

Other elements include a winter garden between the office towers, a day care center, and an extension of the PATH network west from the Skywalk. The complex would implement a number of energy efficiency measures, with a goal to receive LEED Platinum (or better) certification upon completion.

The concept plan stands as one of Oxford’s largest complexes after the massive Hudson Yards development in Manhattan. Oxford is aiming to start construction in 2023, pending the proposal’s passing through the City’s planning and approvals process.

Eric Plesman is also quoted in the release saying: “This development will bring tens of thousands of jobs to Toronto, and will create a progressive new workplace and community for working and living. The population in Toronto’s core has exploded over the past decade, and our family-friendly multi-bedroom apartments and day care will help to address the need for housing that allows families to continue living in the core.”

The previous plan from 2012 placed its tallest towers to the east of the current proposal on the existing convention center’s north building footprint. It is safe to assume that similarly impressive towers will eventually be revealed for the site’s eastern portion.