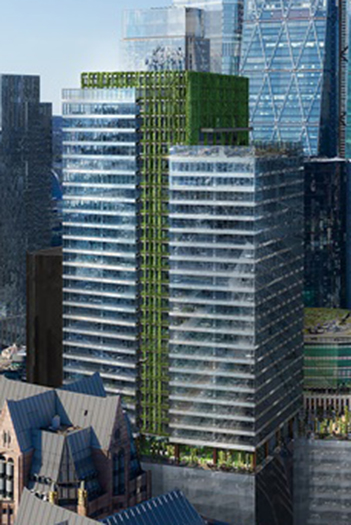 Eric Parry Architects has unveiled plans for a new 36-story tower in the City of London, featuring a huge green wall.

The address at 50 Fenchurch Street has been home to The Clothworkers Company for almost 500 years and is currently occupied by a seven-story office block, with a livery hall used by its owner.

In 2015, Dickson Architects was hired to revamp the building’s interior on behalf of the livery company. But now the Clothworkers wants to demolish the building, “relocating” a 12th-century crypt to make way for the Eric Parry tower.

The new scheme would contain an underground livery hall, as well as ground-floor shops, 62,000 square meters of office space and a public roof garden.

The scheme would also see “improvements” to the Grade I-listed Tower of All Hallows Staining and its Grade II-listed companion, Lambe’s Chapel Crypt.

The tower would include “extensive vertical landscaping” stretching over more than 20 stories, together with glazing around the rest of the tower and a ceramic façade at the base.

The site sits a stone’s throw from Rafael Viñoly’s Walkie Talkie at 20 Fenchurch Street and around the corner from Parry’s not-yet-built 1 Undershaft. That skyscraper was given formal planning permission last week, three years after it was approved by the City of London’s planning committee.

“The design journey of this urban proposition has been one of the most remarkable alignments between commerce, culture and the public realm that I have experienced,” said Eric Parry in a statement.

Further east at Queen Elizabeth Olympic Park (QEOP), Alison Brooks has been appointed to design two new blocks on the fringe of the park, which will replace a previous proposal by AECOM.

Following an international competition for joint-venture developers Lendlease and LCR, the firm was chosen ahead of four other firms for the residential-led project within the International Quarter London (IQL) development in Stratford, East London.

The developers have dropped AECOM’s earlier designs from 2018, which featured a 37-story tower and a 31-story sister block (officially S1 and S11). That scheme would have created 497 new homes.

The project has been trimmed in scale and will now feature a single centerpiece 34-story tower and a much shorter neighboring block. The number of homes has decreased to 330.

If approved, the scheme will become Alison Brooks’ tallest scheme to date in the UK, the practice’s previous highest design was for a 28-story skyscraper in Greenwich.

Public consultation on a final set of designs for the ‘gateway site’ to the QEOP is expected to start in January 2020.

According to the development team, the proposals will “demonstrate the very highest standards of architecture, while also melding seamlessly into the existing mix of residential, commercial and retail property” at the IQL.

Justin Davies, head of residential at Lendlease, Europe, said, “Alison Brooks Architects have a wealth of experience in designing high-quality residential buildings, and they have been hugely collaborative throughout this process.”

“We are keen for that approach to continue as we take forward a project that will see us double the amount of housing on offer at IQL.”

Alison Brooks added, “Our intention is to bring new character and urbanity to this park-side site, evoking the spirit of early 20th-century residential towers of New York and Chicago.”

“Our proposal is conceived as a series of nested hexagonal columns that form ‘park ledges’ rising above a colonnaded base. We look forward to developing this concept with Lendlease and the wider Stratford and QEOP communities.”

For more on these stories, go to Architects’ Journal.