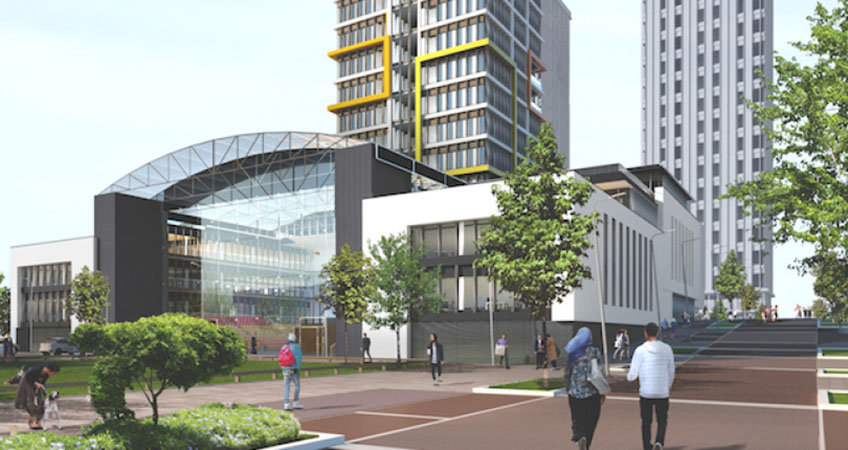 The plans include building three office and residential towers as part of an initial phase of the project that will transform the Teesside Valley skyline.
22 October 2019 Middlesbrough, United Kingdom

A £250 million (US$323 million) project that aims to establish Middlesbrough as the UK’s main digital city, potentially leading to the creation of more than 2,000 jobs, has been unveiled.

The plans include building three office and residential towers as part of an initial £45 million (US$58 million) phase of the project that will transform Teesside’s skyline and, it is claimed, lead to 1,000 new jobs in the digital and creative industries, rising to 2,000 jobs in future phases.

Middlesbrough mayor Andy Preston and Tees Valley mayor Ben Houchen presented the bold vision for the town, which will benefit from what is claimed to be the biggest single investment in Middlesbrough’s history.

Construction of the first phase, which will include three 20 story-towers, will start next summer. It will see the creation of a digital campus, a 750-seat indoor amphitheater beneath a glass atrium and a 400-seat outdoor amphitheater to host events such as lectures, cultural events and entertainment.

“For the next few years my obsession, my mission, my purpose on this planet is to get Middlesbrough on track as the digital city for the UK.”

Mayor Preston said: “For the next few years my obsession, my mission, my purpose on this planet is to get Middlesbrough on track as the digital city for the UK. This is a first step of scheme that will propel Middlesbrough on a journey to become the UK’s digital capital—bringing investment, jobs and prosperity to the town.

“The sky’s the limit if we think big—and that’s exactly what we’re doing with this project. We want our existing digital businesses to grow, regional businesses to realize this is the place to be, and national and international businesses to be attracted here. We have the money and investors in place. Planning consent will be sought within weeks and construction will start next summer.”

Mayor Houchen added: “Through the funding which was agreed in January, we have already bought Teesside International Airport and more than half of the developable land at the South Tees Development Corporation, as we push on with transforming Tees Valley.”

For more on this story go to Infrastructure Intelligence.