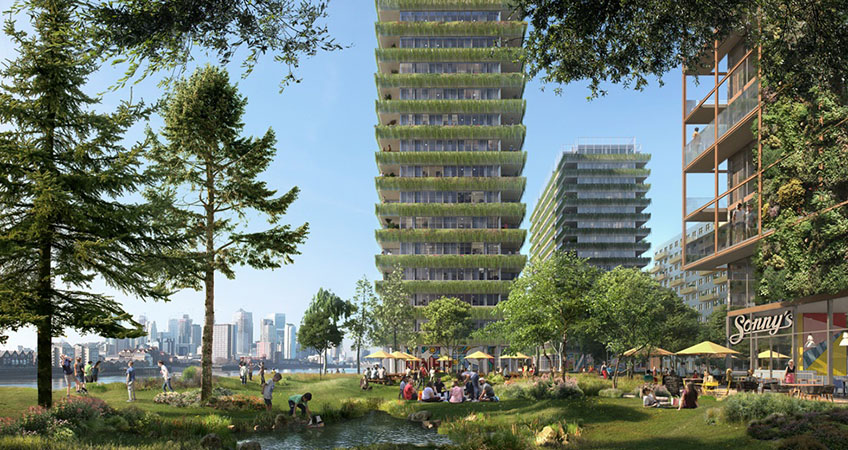 The scheme is expected to deliver 1,500 homes, with 35% affordable, a large riverfront public park, and the refurbishment of existing warehouses.
08 October 2019 London, United Kingdom

Under the plans currently out for public consultation, the former Tate & Lyle sweeteners refinery on the Greenwich Peninsula will be redeveloped into a 178,300-square-foot (16,565-square-meter) mixed-use scheme of 10 buildings.

Architecture firm OMA has revealed its long-awaited master plan for a residential development on the giant riverside plot. The Rem Koolhaas-led practice has drawn up plans for developer U+I, which include a crop of towers of up to 37 stories high on a 7.6-hectare site next to the O2 Arena.

To be called Morden Wharf, the scheme is expected to deliver 1,500 homes, 35 percent of which will be affordable, a large riverfront public park and the refurbishment of existing warehouses.

“The designs for the high-rises include vertical and horizontal green façades, which the developer said were inspired by Jean Nouvel’s Le Nouvel KLCC towers in Kuala Lumpur.”

The designs for the high-rises include vertical and horizontal green façades, which the developer said were inspired by Jean Nouvel’s Le Nouvel KLCC towers in Kuala Lumpur. The second-tallest tower also features a tapering base, handing over more space to the public realm.

The scheme, which has a gross development value of £775 million (US$946 million), also proposes a riverfront bar or restaurant, children’s nursery, community space and retail space.

OMA was first appointed to master-plan the site in 2013, after the site was bought by Cathedral Group and Development Securities, which later merged to form U+I.

While the north of the site remains active industrial land, much of the southern site was cleared in 2009, apart from a large brick warehouse building and a former office building along Tunnel Avenue.

Elsewhere on the peninsula, Santiago Calatrava is drawing up plans for a £1 billion (US$1.2 billion) development of the area surrounding the North Greenwich tube for developer Knight Dragon.

The eye-catching scheme was unveiled to great fanfare in February 2017, but no planning application has yet come forward for the site. However, it recently emerged that Calatrava’s centerpiece—a cluster of towers resembling an upturned stool—looked set to be axed from the project.