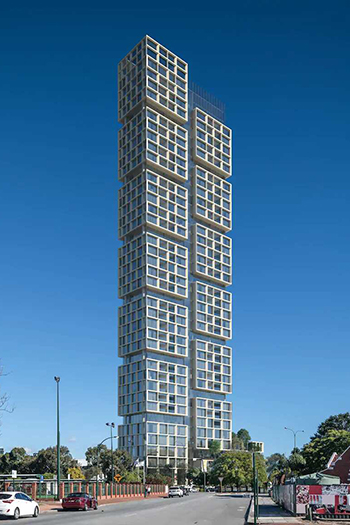 After a delayed application process, which included a previous plan for a Woods Bagot-designed 41-story tower, the approved development will deliver a 37-story Bates Smart-designed scheme with 99 apartments, commercial, and retail space on the corner of Labouchere Road and Lyall Street.

Sirona had previously lodged plans for the site, which sits opposite Perth Zoo, but it was rejected in December 2018.

The Western Australia real-estate funds manager Sirona says it reduced the number of apartments and scaled back the design from its 138-meter height to be consistent with other proposed developments in the South Perth precinct.

“I’m very happy with where things have landed,” Sirona Capital managing director Matthew McNeilly said. “While the pathway to approval had been long and frustrating and expensive, it has been worth the effort.”

The AUD$65 million (US$44 million) project is a joint venture between Sirona Capital and Singapore-listed Chip Eng Seng Corporation.

“What we’re offering is high-quality design, a totally new and thoughtful approach to a tower development, and South Perth is the right location for it,” McNeilly said. “Bigger complexes can feel less personal, and that’s what we want to avoid, especially in a tight-knit community like South Perth.”

Singapore-based NL Homes Melville’s proposal for its 26-story tower in South Perth was also reconsidered and approved in November 2019.