Plans for an 18-Story tall Skyscraper in Newcastle Revealed 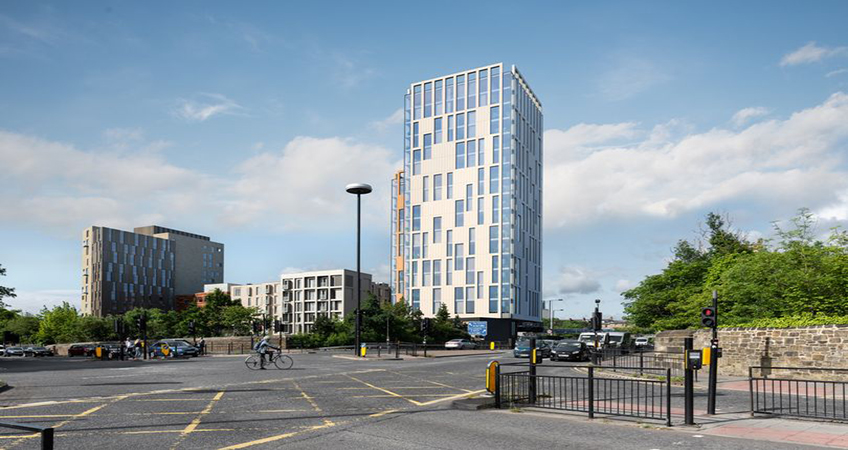 Developers have unveiled plans to build a GB£15 million (US$19 million) residential skyscraper standing 18 stories high in a Newcastle suburb.

Jomast Developments has been leading changes at the former Scottish Life House Estate close to the city’s Central Motorway at Jesmond after acquiring the site back in 2004.

Now home to the Jesmond Three Sixty scheme, the site’s old office buildings have been transformed into new apartments and offices, alongside bars and restaurants.

Jomast, based in Stockton, has now unveiled plans for a conjoined residential scheme of 12 and 18 story towers with around 85 apartments, standing 187 feet (57 meters) high.

That makes it one of the tallest new housing schemes in the city behind the emerging Hadrian’s Tower on St James’ Boulevard, which will be 270 feet (82 meters) high when complete.

The site next to Jesmond Road was previously occupied by the Quaker Meeting House, which was demolished in 2018.

“GT3 has previously been praised for its work at Jesmond Three Sixty after re-purposing some of the existing buildings, such as the Eaga House.”

Jomast’s development director Adam Hearld has said: “This proposal will create an impressive residential development and complete the highly successful Jesmond Three Sixty scheme. It follows the success of One Jesmond Three Sixty, an 80-unit privately rented apartment scheme, and displays Jomast’s confidence in the city. It will create a landmark development which demonstrates that Newcastle is the ambitious and forward-thinking capital of the North East region, with aspirations for growth, reflected in high-quality and ambitious architecture.”

The proposed development would take place in tandem with the transformation of Sandyford House, which has been granted permission to convert the site into apartments and a multi-story car garage, planned for the south west corner of the site.

The new proposals are designed to deliver housing for private rentals targeting young professionals and graduates with opportunities for commercial and leisure uses on the lower floors. GT3 has previously been praised for its work at Jesmond Three Sixty after re-purposing some of the existing buildings, such as the Eaga House.

When complete, Jomast will have invested over GB£35 million (US$44 million) into Jesmond Three Sixty.

For more this story, go to Chronicle Live.