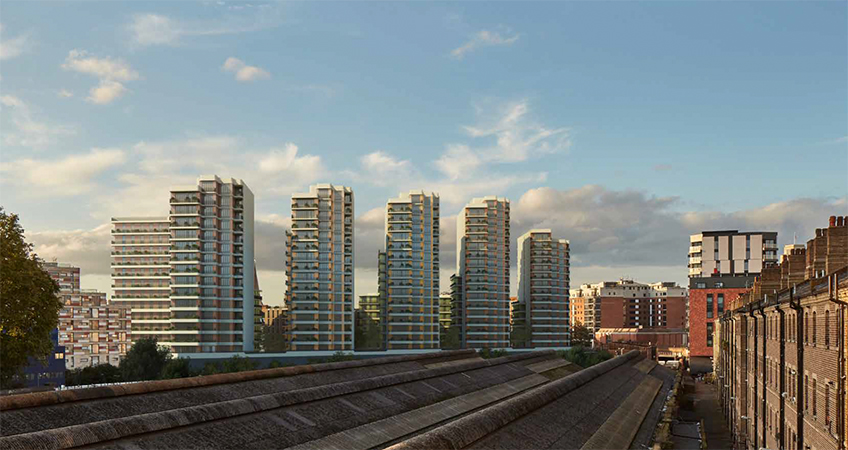 Astudio has been given planning permission for a 781-home redevelopment of the Ebury Bridge Estate by Chelsea Bridge in west London.

The existing 1930s buildings will be replaced by nine new blocks ranging from eight to 19 stories tall by Westminster Council and its contractor Bouygues. Demolition is currently underway, after the local authority gave itself permission to begin ahead of a planning consent.

The hybrid application approved by Westminster Council on 20 April, 2021 contained detailed plans for two blocks, of 17 and 18 stories, providing 226 homes. These will be built in the first phase of development, while other cleared space will be used for "meanwhile uses."

These include a row of colorful two-story timber units by Jan Kattein Architects, which will provide 505 square meters of workspace and other community facilities.

The planning application by astudio also included a design code, which it pledged to use when designing the details for the remaining six blocks. The code sets out several constraints for the future blocks, including composition of façades and the metalwork to be used on balconies.

The planning decision follows protracted and contentious work on redeveloping Ebury Bridge Estate. Residents voted for initial designs by HTA Design in 2013, but the scheme was later dropped as Westminster Council was unable to find a development partner.

Nevertheless, in September 2019 Westminster Council was criticized by now-deputy London mayor Tom Copley for using "underhand and unscrupulous tactics" to demolish parts of the estate using permitted development before a planning application had been approved.

At the time, a spokesperson for Westminster council responded that it was "extraordinary that a Labour London Assembly member is trying to stop this project, especially given the shortage of affordable housing in the capital."

Planners at Westminster Council described the astudio scheme as having ‘a well-considered design, including an appropriate and rational arrangement of layout, height and massing’.

They added: "The quality of architecture, materials and public realm established within the design code and set out within the detailed scheme is of a high standard."

Richard Hyams, co-founder and chief executive of Astudio, said: "We are delighted to achieve this milestone for such an important regeneration project – one of the largest and most significant in south Westminster for an entire generation.

"The quality of our design has been driven by a truly visionary Westminster client and with the local residents have actively engaged with the design team to set new standards for estate regeneration."

"The new homes will use 90 percent less carbon compared to the existing estate and it will be a low-car scheme. The right to return for residents is guaranteed for all secure tenants and resident leaseholders."