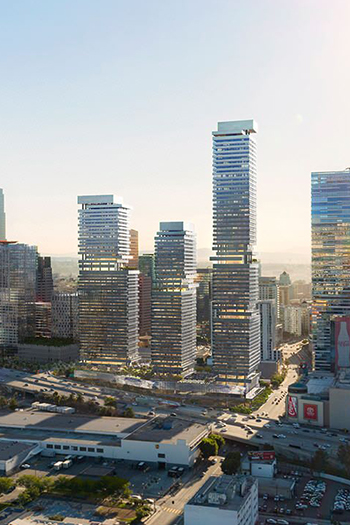 Harridge Development has successfully dismissed a recent lawsuit against its Crossroads of the World megaproject in Hollywood.

A judge has tossed the lawsuit from the AIDS Healthcare Foundation (AHF), which sought to overturn the city-approved residential towers development from beginning work on Sunset Boulevard.

The suit contended that the US$1 billion project, which will feature 950 apartments and condos, a hotel, and 190,000 square feet (18,000 square meters) of space, would violate local housing laws. The AIDS Healthcare Foundation said Harridge’s development would lead to higher rents across the neighborhood and displace longtime tenants, many of them Black and Latino.

But Los Angeles County Superior Court Judge Robert Draper sided with the city and Harridge, which has said there will be a net increase of 2,096 housing units from the project, including 180 units for low- or very low-income families.

Draper criticized the foundation for filing multiple housing-related lawsuits against the city.

“California courts have made final decisions in two previous cases, both involving AHF and the city, both not in AHF’s favor,” the judge wrote. “AHF is attempting to circumvent these previous decisions by repeatedly filing similar cases based on different legal theories.”

Some of AHF’s separate cases include developments close to the nonprofit’s Hollywood headquarters. One lawsuit seeks to prevent GPI Companies from building a 26-story residential tower at the site of Amoeba Records on Sunset Boulevard. Another case opposes CIM Group’s 299-unit Sunset Gordon tower project.

Both projects, AHF contends, would accelerate Hollywood gentrification, leading to the displacement of longtime residents. AHF’s most recent court complaint alleges the city should have set aside money under the Measure HHH bond act toward the construction of a housing project on Skid Row. AHF is also still seeking to get a statewide rent control referendum question on the 2020 ballot.