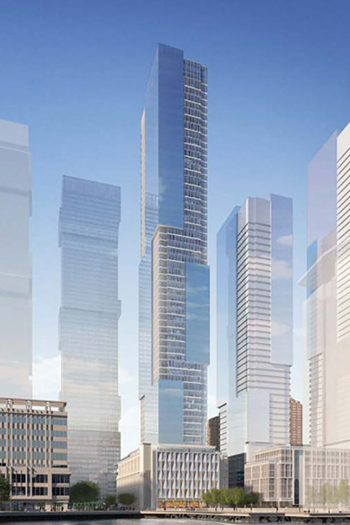 If approved, the 708-foot (216-meter) building would be among the tallest structures in the state of New Jersey.
07 November 2019 | Jersey City, United States

Permits have been filed for a 68-story mixed-use skyscraper at 242 Hudson Street in Jersey City named Harborside 8. If approved, the 708-foot-tall (216-meter) building would be among the tallest structures in the state of New Jersey. Plaza VIII & IX Associates LLC, a subsidiary of Mack-Cali’s Roseland Residential Trust, is responsible for the development.

As reported by Jersey Digs, the city’s planning board gave Mack-Cali the thumbs up to subdivide the 169,000-square-foot (16,000-square-meter) property earlier this year, increasing the chances of multiple high-rises. This lines up with plans that include a revision to the layout of the nearby Lutze Biergarten to make way for one of three towers projected for the site.

The proposed development will yield 680 residential units, 18,662 square feet (1,700 square meters) of commercial space, and 505 parking spaces, of which 329 would be located within the building. The residential component will include 206 studios, 266 one-bedrooms, 183 two-bedrooms, and 25 three-bedrooms. The property is located steps from the Harborside station on the Hudson–Bergen Light Rail system.

Boston-based Elkus Manfredi Architects is listed as the architect of record.

An estimated completion date has not been announced.