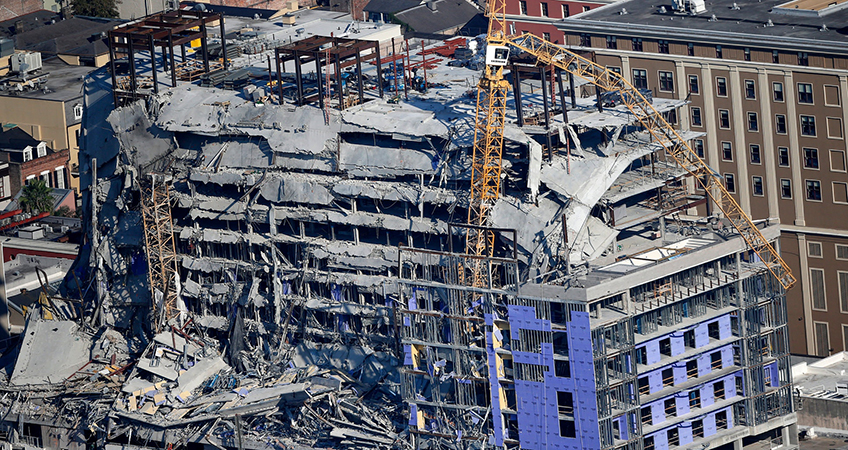 Demolition crews used explosives to try to safely take down the cranes, which were each more than 250 feet (76 meters) tall, from the building’s damaged shell.
21 October 2019 New Orleans, United States

The demolition of two construction cranes that were in danger of falling didn’t go exactly as planned on 20 October 2019, at the site of a building collapse in New Orleans. One was left dangling high above a city street.

Demolition crews used explosives to try to safely take down the cranes, which were each more than 250 feet (76 meters) tall, from the building’s damaged shell. Three workers were killed, and more than 20 other people were hurt on 12 October 2019 when portions of the upper floors of the building, a future Hard Rock Hotel that was under construction, collapsed.

While one of the cranes broke apart and came down in a cloud of dust, the second one teetered from the side of the 17-story building.

Although the crane was left clinging to the skeleton of the building, city officials played it down, saying that the demolition, which had been postponed the previous Friday, went as expected.

“I do not think it could have gone much better,” Timothy McConnell, chief of the New Orleans Fire Department, said during a news conference after the demolition. “We’re way better than we were.”

Chief McConnell said city engineers would decide whether the remaining crane should be dismantled before the half-completed hotel is leveled or come down during the demolition.

“Remember, the building collapsed, so it’s still a dangerous building,” he said. “The building is still very unstable.”

LaToya Cantrell, the city’s mayor, said during the news conference that the priority was to recover the bodies of two of the three people who were killed in the collapse. The other victim’s body was removed from the rubble last Sunday.

“My timeline is right now,” Cantrell said of recovering the bodies.

Chief McConnell said that a sewer line was damaged when the crane crashed down, but that gas and electric lines were unscathed in the demolition.

The hotel, on Canal Street, had been under construction for at least a year. Plans called for 350 rooms, residential spaces, two ballrooms, and 12,000 square feet (1,100 square meters) of event space. The cause of the collapse has yet to be determined.