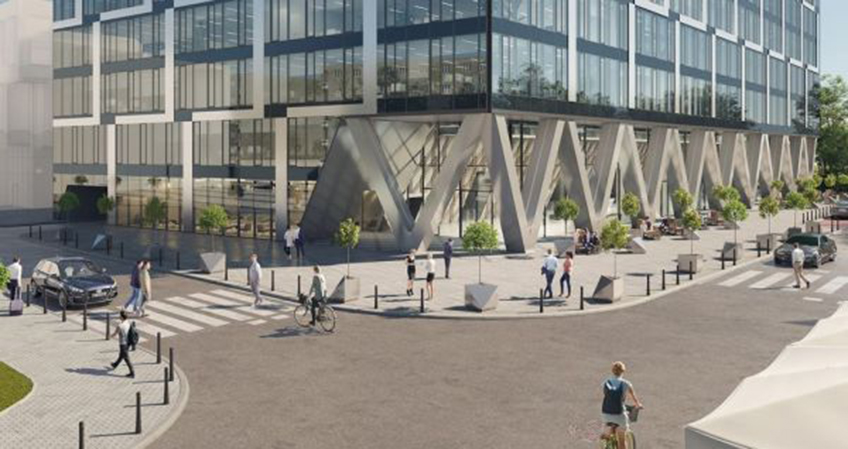 A distinctive feature of the 14-story office building are its cascading green terraces.
20 May 2020, Warsaw, Poland

Advanced finishing work is in progress on the Chmielna 89 office project in Warsaw city center, which is being developed by Cavatina Holding.

The 14-story, 25,000-square-meter office building is located west of the CBD, between ul. Chmielna and the city's main thoroughfare Al. Jerozolimskie.

“We are extremely proud of the Chmielna 89 project, not only because of its timeless architecture, which has received a number of awards, but also because it will be the seat of one of the largest financial institutions in Poland – PKO BP bank. The tenant will be moving around the end of Q3 or early Q4 this year and is to occupy all the office floors. The project will stimulate the development of the neighbouring infrastructure, energise the local community and promote the development of micro-business in its immediate area, mainly in terms of services and gastronomy,” comments Sebastian Świstak, the commercialisation director of Cavatina’s Warsaw branch.

The service space, on the ground floor of the building, will include a canteen, a store, and a café. One distinctive feature of the design are its 370-square-meter cascading green terraces.

Fit-out work is currently underway on all floors of the building, while the paving and other outdoor features, such as benches and plant pots with LED-lights at their base, have already been finished around it.

“Chmielna 89 is distinguished not only by its original shape, but also by the attention to architectural detail and the high quality of the materials used. With its linear-rhythmic façade arrangement made up of panels imitative of stainless steel, we have managed to achieve a light, elegant and at the same time dynamic shape; while the decorative, oblique construction poles along the arcade will bring the building to life at night wonderfully, making it visible from a distance. Chmielna 89 is set to become part of Warsaw’s new, iconic, architectural and business district of Warsaw – Wola,” emphasizes architect Mateusz Wiąckowski of Cavatina’s investment design department.

In November 2019 it was announced that Globalworth had signed a deal to acquire the building, which was expected to go through in Q1 2020. The finalization of this transaction has yet to be announced.

For more on this story, go to Eurobuild.