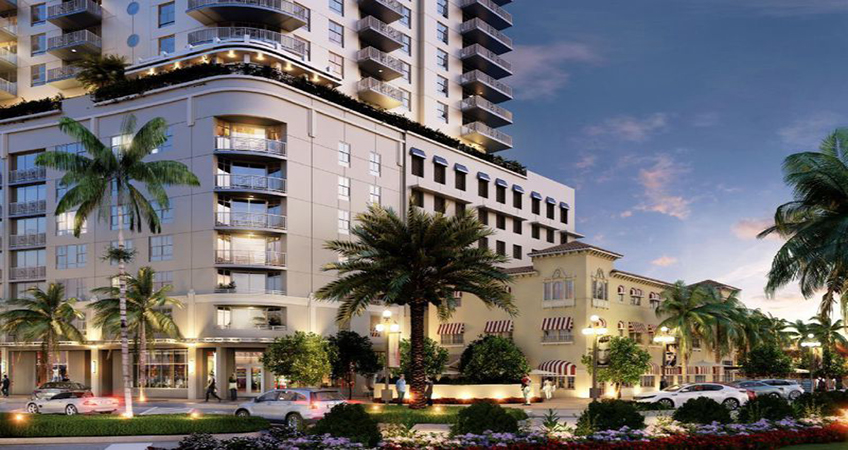 The tower is expected to break ground in September and will take more than two years to build.
14 August 2019 Hollywood, United States

A dead zone on a prime downtown Hollywood corner, once home to a bustling 1920s-era hotel, will soon get new life in the form of a 19-story skyscraper.

The long-awaited project will break ground soon, bringing 166 apartments and 103 Hilton Garden Inn rooms to the heart of downtown. The tower, dubbed Block 40, will rise on the southwest curve of Young Circle, the same spot occupied by the landmark Great Southern Hotel, built by city founder Joseph W. Young in 1924.

In a nod to preservationists, developer Charles “Chip” Abele’s spiffy new high-rise will preserve the historic hotel’s northern and western walls as well as a portion of its interior. The building had closed in 1991 after years of neglect and mounting code violations.

“It’s a critical piece of downtown that’s just been vacant for way too long,” she said. “We’re all very excited to have that corner filled with life and activity. It will bring some vitality to that part of downtown.”

Hollywood leaders have waited more than a decade for the tower to begin construction. The project was delayed by a lawsuit, an economic downturn, and permitting snags after first winning approval in 2005.

“It’s a critical corner,” Biederman said. “It brings tourists to the downtown—tourists that will come to our shops and eat in our restaurants.”

“We’re all very excited to have that corner filled with life and activity. It will bring some vitality to that part of downtown.”

The tower, expected to break ground as soon as September, will take more than two years to build, a spokeswoman for Abele said.

Shop and restaurant owners said they’re glad the project is finally on the way, but are bracing for the downtown traffic snarls that typically accompany construction on such a key corner.

Business owner Jamie Mardis worried any long-term road closures might add “a few more nails [in the] coffin” for struggling shops along Hollywood Boulevard, where one out of every three stores is vacant.

“Downtown has it hard enough with all the competition from Dania Pointe and Gulfstream, Fort Lauderdale, and Wynwood. Shutting off the flow to Young Circle will deter people even more,” Mardis said.

Ann Tanner owns the Spiritual Psychic Botanica, which sits just a few stores west of the future construction site. “I’m very happy it’s finally going up,” she said. “I think it will be great for the neighborhood. But I am also worried about the construction making things a bit congested.”

The temporary pain of construction will be well worth it, said Don Weimer, president of the Downtown Hollywood Business Association.

“When it’s finished, this project is only going to draw more people downtown—and not just during [tourist] season, but year-round,” he said. “Downtown Hollywood is going to be a destination. Looking at another vacant building for another two years makes no sense to me. We either do it now or we’re going to be left behind.”

For more on this story, go to Sun Sentinel.