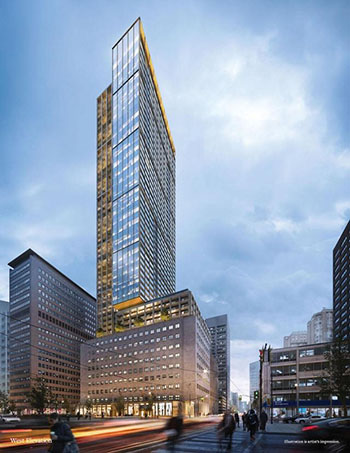 Last week, developer Davpart officially announced The United BLDG, a towering 55-story condominium development in Downtown Toronto at St. Patrick subway station. Designed by B+H Architects, it will incorporate the heritage-designated Maclean Publishing Company/Maclean-Hunter Building at 481 University Avenue, along with neighboring existing buildings in its base.

Davpart Inc. President and CEO David Hofstedter spoke at the launch about the site’s history and architectural significance. “From 1910 to the 1980s, 481 [University] was the location of Maclean Publishing and later Maclean-Hunter, with several buildings added to become one of the most recognized structures on University Avenue. The existing structure is an example of a commercial building from the interwar era, and is the result of many bold design influences, from Beaux-Arts to Modern Classical.  While restoring the exterior, we will complete the interior to the highest standard of contemporary office and retail available today, so their current uses can continue.”

The existing complex’s preservation and incorporation—tasked to heritage specialists ERA Architects—will restore the architectural features to their original glory, as well as reanimating a section of the ground floor by transforming a series of arches into a sheltered colonnade that widens the Dundas Street sidewalk. ERA Architects Principal Graeme Stewart describes the firm’s role as “retaining, restoring and enhancing two large and significant buildings.”

Above the commercial and retail floors, 759 new condominium residences are being offered in a mix of one-bedroom, two-bedroom, and three-bedroom designs—some with a den, flex, or media room, and others with two-story plans—ranging in size from 300 square feet (28 square meters) to 1,400 square feet (130 square meters). Residents will access their suites via a dedicated residential entrance at 88 Centre Street, as well as through an indoor access point to St. Patrick Station.