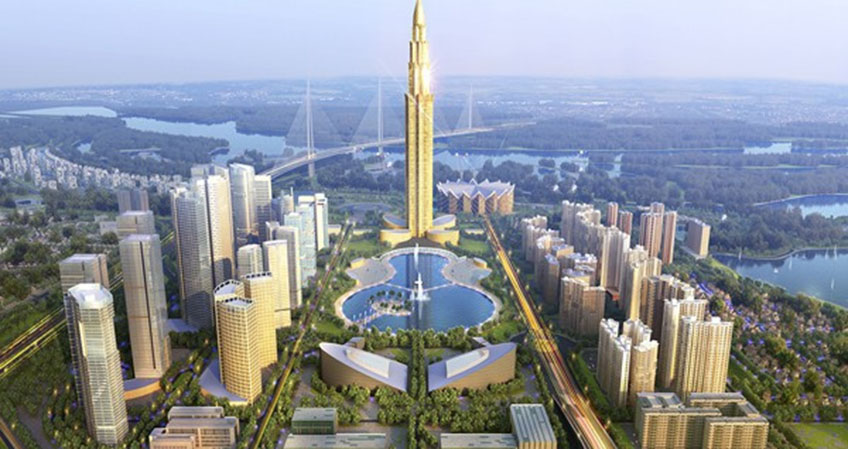 A joint venture between BRG Group and Sumitomo Corporation broke ground for construction of a US$4.2 billion urban planning scheme in the north of Hanoi.

Spanning 272 hectares, the township is part of a smart city development stretching 11 kilometers from Nhat Tan Bridge to Noi Bai International Airport. It is divided into five phases, which are expected to be fully completed by 2028. In addition, by introducing 5G, face-recognition system and blockchain technologies, the area will feature sophisticated smart city services.

The groundbreaking ceremony was attended by Prime Minister Nguyen Xuan Phuc. Sumitomo Corporation will team up with BRG Group to develop the first phase on 72 hectares at estimated development cost of US$1 billion.

BRG Group chairwoman Nguyen Thi Nga said that a 108-story financial tower with a lotus design would help Hanoi to become a modern capital and financial center in Southeast Asia, on par with the capitals of developed countries in the world.

A new metro line run will from the downtown area via the project to Noi Bai International Airport, with a new station planned to be built within the project’s area. Sumitomo Corporation will implement the project, considering a transit-oriented development centered on the new station.

The transit-oriented development will be composed of hospitals, schools, disaster-prevention facilities, security systems and commercial facilities, as well as lush greenery, a water passage, and a main street lined with cherry blossom trees to create a comfortable environment and residential community.