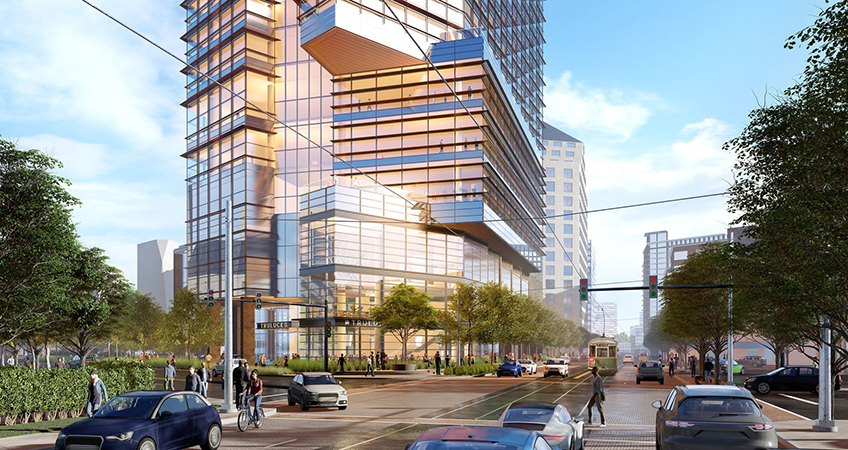 Construction will start early next year on the McKinney Avenue office tower.
22 May 2020, Dallas, United States

A new high-rise in the works for Uptown is the biggest Dallas development announced this year.

Trammell Crow Co. plans to build the 2401 McKinney tower on the block between Maple Avenue and Fairmount Street.

The more than 2-acre (0.8-hectare) site next to the Crescent is occupied by Truluck’s restaurant and Gold’s Gym.

“It’s in the heart of Uptown,” Trammell Crow senior managing director and principal Scott Krikorian said. “It’s a great opportunity for us to transform this underutilized site with a world-class office development with a significant amount of street retail.

Truluck’s will be the anchor retail tenant for the project.
“They had a 20-year lease,” Krikorian said. “The key was to work out a deal with them to provide for a new restaurant in the building.”

Crow Co. has been working on the site for years.

“We assembled those two tracts of land with Gold’s and Truluck’s starting in 2016," Krikorian said.

Tramell Crow Co. selected Connecticut-based architect Pickard Chilton to design the project, and Dallas’ HKS will be the architect of record.

“In January, we did a design competition,” Krikorian said. “We had five world-class architects come in and give their vision for the site.”

Krikorian said Crow Co. wants the new tower to be worthy of a neighborhood that already has high-profile buildings by architects Philip Johnson, Robert A.M. Stern and César Pelli.

“The buildings are all here along McKinney, from the Crescent to the Ritz-Carlton go McKinney and Olive—incredible architecture,” he said. “We wanted to do something that would be different but also in the same genre of great architecture.”

The 2401 McKinney tower will have landscaped plaza areas on the street and terraces on cantilevered sections of the building’s floors.

“We’ve tried to maximize the open space and push back from the surrounding buildings,” Krikorian said. “We set the building back along Maple so that we could create a connection of our plaza that aligns with the Crescent’s motor court.”

Trammell Crow Co. plans to start construction on the tower early next year with an opening in mid-2023. The developer is seeking zoning changes to allow for greater height and density for the project.

The developer is pushing ahead with this new project as leasing wraps up on Crow Co.’s 20-story PwC Tower in the Park District complex at Pearl Street and the Woodall Rodgers Freeway. The 497,000-square-foot (46,172-square-meter high-rise) high-rise is 94 percent leased. Crow Co. recently signed a deal with Morgan Stanley for a block of office space in the building.

All of the recent office building additions to the Uptown area have leased ahead of schedule and at higher than anticipated rental rates.

“Obviously the market has been very tight in Uptown in this part area,” Krikorian said. “Who knows what happen when you come out of COVID-19—we’ll see.

“But I do believe in this location, and what we are taking about building is a generational asset.”

He said the developer has already identified a couple of potential anchor office tenants.

Crow Co.’s McKinney Avenue tower is one of the few major Dallas developments unveiled during the pandemic.

Crescent Real Estate announced plans last month for a more than 30-floor luxury residential tower on Maple Avenue between the Stoneleigh Hotel and the Crescent.

Other office projects previously announced for the Uptown area include a 27-story tower planned by Granite Properties at Maple and Cedar Springs Road.

And developer Harwood International is planning a more than 40-story office tower on the edge of Victory Park near Harry Hines Boulevard.

Only two offices are under construction north of downtown: Hillwood’s 15-story Victory Commons in Victory Park and Kaizen Development Partners’ 25-story building going up at Akard and Olive streets.