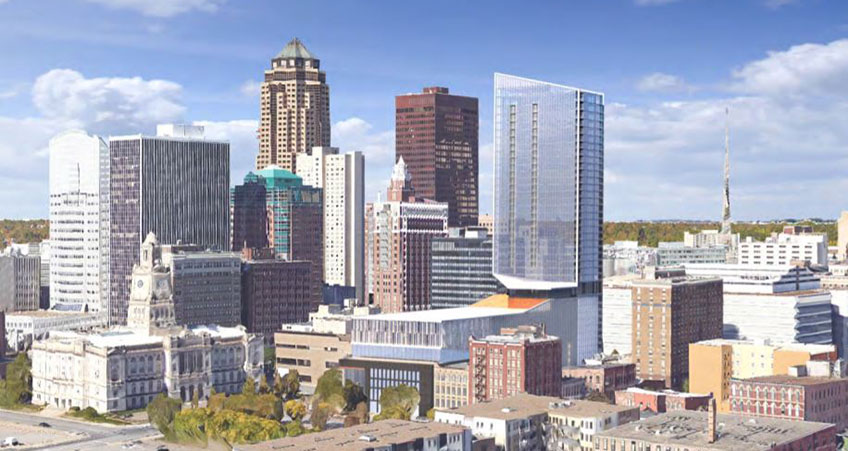 New deadlines have been proposed for a 39-story luxury residential and hotel building in Des Moines that was scheduled to start construction six months ago.
21 May 2020 Des Moines, United States

Instead, Justin Mandelbaum, the developer spearheading the project called the Fifth, has missed numerous deadlines dating back to last October.

Without evidence that the project is moving forward, city officials in early April gave Mandelbaum until April 24, 2020 to accept proposed changes to a development agreement, said Erin Olson-Douglas, Des Moines’ economic development director. Officials had hoped to gain City Council approval of the changes at a May meeting, she said.

Olson-Douglas said the city has not received a formal response from Mandelbaum and now must decide what steps to take next, which include giving Mandelbaum notice that he is in default of the original development agreement.

If that happens, the city could take control of the parking garage under construction at Fifth Avenue and Walnut Street as well as adjacent property where two other pieces of the project—the high-rise and a five-story commercial building—are planned.

Mandelbaum, on Tuesday, 12 May, 2020 said his team is working on putting finishing touches on architectural renderings and construction documents and that he’s been in contact with City Manager Scott Sanders about proposed changes to the development agreement.

"Nobody wants this project to move forward quicker than me," Mandelbaum said.

Redevelopment plans for the southeast corner of Fifth and Walnut began moving forward in mid-2015 when the council selected West Des Moines-based Mandelbaum Properties as the preferred developer for the city-owned land where a dilapidated parking garage once stood.

Mandelbaum gained various city approvals to move forward with the US$200 million project that includes an 11-story parking garage, the skyscraper and a commercial building with a multi-screen movie theater and restaurant.

While work is progressing on the parking garage, construction on the tower and commercial building have not begun.

For more on this story, go to Business Record.