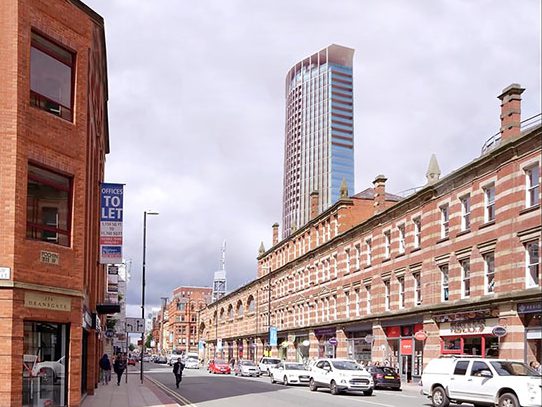 Skidmore, Owings & Merrill (SOM) has been brought in to deliver Hodder + Partners’ controversial Saint Michael’s tower in Manchester, with the local practice kept on the project as design guardian.

The US firm behind New York’s One World Trade Center and Chicago’s Willis (formerly Sears) Tower has been appointed by contractor Laing O’Rourke as architect for the build-out of the 40-story skyscraper.

The developer, a partnership, which includes ex-footballers Gary Neville and Ryan Giggs, and Singapore-based, Rowsley Ltd., confirmed Hodder would be retained on the reshuffled team.

Stephen Hodder agreed to stay on as he had worked on the project for two years and “turned the scheme around.” He said: “I now feel that I have a civic responsibility as design guardian, to ensure the project is delivered as per the planning consent. As the design develops, it needs to be fully compliant, and I’ve been reassured that it will be delivered along the lines of what has been approved.”

SOM’s appointment is the latest in a series of reshuffles on the high-profile project, which will create 13,657 square meters of office space, 2,973 square meters of leisure space, 170 apartments, and a 200-bedroom hotel.

Hodder + Partners’ tower, approved in March 2018, replaced a previous proposal by Make, which resigned from the city-center development after working on it for almost a decade. Hodder’s reworked design changed the configuration of the single 134.5-meter-high center piece skyscraper into a “unique lozenge shape” with a floating canopy supported by a three-story colonnade at the crown of the building.

Among the changes to the reworked scheme were the retention of the historic Sir Ralph Abercromby pub and the frontage of the Neoclassical Bootle Street Police Station (1937). Both had been scheduled to be demolished to make way for the Make-designed development, and in January 2017, the police station was included in The Twentieth Century Society’s top 10 list of buildings most at risk.

Despite the design changes, Hodder’s scheme also proved controversial. SAVE Britain’s Heritage attempted to challenge Manchester Council’s approval of the scheme, but the government turned down the request.

For more on this story visit the Architects’ Journal.