Mumbai High-Rise Evacuated Due to Fire 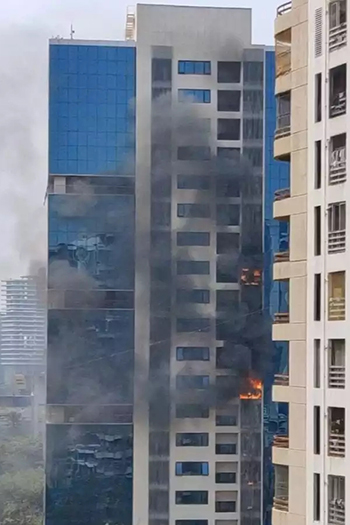 Around 1,000 people were in the building when the fire broke out. Many of them came out safely after noticing the blaze, before the arrival of the fire brigade.
14 October 2019 | Mumbai, India

Many people were feared trapped after a major fire broke out in the 21-story Peninsula Business Park Building at Andheri (West) in Mumbai on 14 October 2019.

At least 65 people trapped on the terrace of the building were rescued by fire brigade personnel.

Around 1,000 people were in the building when the fire broke out. Many of them came out safely after noticing the blaze, before the arrival of the fire brigade.

The fire was confined on the lower floors of the building and smoke spread to the entire building.

“Those on lower floors and upper floors came out safely immediately after noticing the fire smoke. Some people on the upper floors could not come down as nothing was visible due to the smoke. They rushed to the terrace, firemen rescued them after two hours of struggle,” fire personnel said.

Eyewitnesses stated that some people rescued by firemen complained of suffocation and were taken to a nearby private hospital.

“Fire was confined in the electric duct from 6th to 12th floor of the building and the situation is under control,” said chief fire officer PS Rahangdale.

“As the firefighting system of the building was in working condition, the blaze was extinguished within the shortest time,” he added.

For more on this story, go to The Times of India.