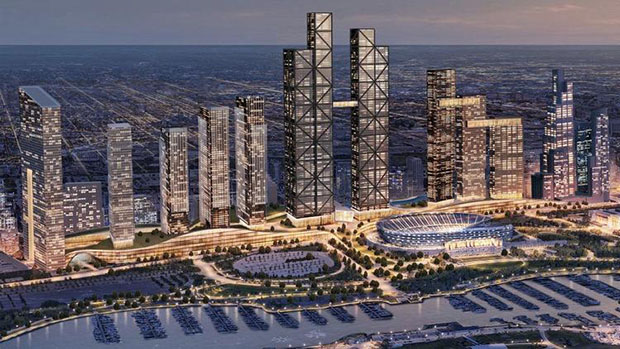 Chicago’s City Council has approved multiple new projects that are set to change the face of the skyline. Sterling Bay’s Lincoln Yards was approved by the city council on March 13, 2019. Simultaneously, Skidmore, Owings & Merrill released plans for an 18-story high-rise in the city’s Fulton Market District and 167 N Green Street was given a foundation permit in the same neighborhood. Adding to the busy news day in the United States’ third-largest city, JDL Development secured financing for an apartment-condo project, set to be the sixth-tallest building in the city. Additionally, Landmark Development unveiled plans for a South Loop project; and two prominent developers announced plans for a mid-rise.

With a 33-15 vote, the Chicago City Council approved the Lincoln Yards planned development, clearing the way for Sterling Bay to move ahead with its $6 billion plan. The developer faces a final hurdle next month, when the City Council considers the creation of the Cortland/Chicago River tax-increment financing district, which would be used to subsidize infrastructure projects that would make Lincoln Yards more accessible.

New York-based developer Thor Equities revealed its plan for an 18-story office project next to the Fulton Market District neon neighborhood sign. The design from Chicago-based architectural firm Skidmore, Owings & Merrill adds texture to a landscape where new office construction consists mostly of wide glass boxes and knock-off warehouses. Instead of spreading out across its full-block site, the proposal at 800 W. Fulton Market pushes skyward, with multiple setbacks and terraces for a much slimmer profile when viewed from the east and the west. SOM’s stepped design provides outdoor amenity space for tenants and serves as a more gradual architectural transition between the low-rise buildings of the Fulton Market Historic District and the taller 19-story office project under construction at neighboring 333 N. Green Street.

For more on this story visit Curbed Chicago.

A 76-story skyscraper in River North is ready to rise after its developer secured construction financing for the $850 million residential project. Crews have begun preparing the development site across from the Holy Name Cathedral where Chicago-based JDL Development is building One Chicago Square, which is on track to become the city’s sixth-tallest building when it’s completed near the end of 2022. Designed by Goettsch Partners and Hartshorne Plunkard Architecture, the high-rise will include 795 apartments and 75 condominiums, a Whole Foods grocery store and a Lifetime fitness center.

South Loop Development to be Anchored by Transit and Entertainment

A Wisconsin developer has unveiled conceptual plans for a massive South Loop mixed-use project, anchored by a transit center and entertainment complex across from Soldier Field, a development that could reshape the neighborhood and its connection with the Museum Campus and lakefront. Landmark Development envisions several towers rising from a deck it would build over Metra Electric rail tracks running from McCormick Place to McFetridge Drive. Developed over 20 years, the project, called One Central, could include residential units, offices, stores, hotel rooms, restaurants and entertainment venues, said Robert Dunn, president of Madison, Wisconsin-based Landmark.

CBRE Chicago chairman Robert Wislow and toy magnate Randy Rissman filed a foundation permit for a 12-story office building at 215 North Peoria Street in Fulton Market, joining a growing list of office mid-rises underway in the neighborhood. Originally proposed by Fulton Market developer Shapack Partners in 2015, the new building is set to rise on a parking lot behind the existing six-story WeWork building at 220 North Green Street. Shapack and co-owner Shorenstein Partners secured zoning approval for the project before selling the existing building and empty lot to Wislow and Rissman for a combined price of $43 million, according to Cook County property records. The new building will include 85,000 square feet (7,900 square meters) of office space, a rooftop amenity deck, a 54-space parking garage and 5,000 square feet (460 square meters) of ground-floor retail, according to a statement from Wislow and CBRE Vice Chairman Camille Julmy, who also is a partner in the development.

For more on this story visit The Real Deal.