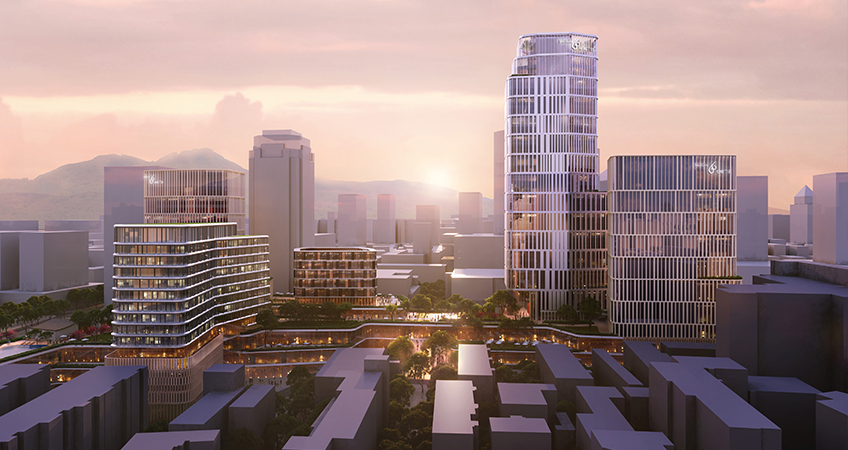 The new Kohn Pedersen Fox project West Lake 66 has broken ground in Hangzhou, China. Situated at the point of connection between West Lake, a UNESCO World Heritage Site, and the Grand Canal, the 194,000-square-meter project seeks to reinvigorate the city’s deteriorated surrounding blocks with five office towers, a boutique hotel, public parks and an active, mixed-use podium. To address the many changing urban conditions of this growing city and emerging technology hub, the scheme will form a new green pedestrian link between West Lake and the Grand Canal, two Hangzhou landmarks, and will provide office space intended to house technology startups and young professionals.

“The concept for the project was instigated by the challenges of the site, which is buried behind a main boulevard and nestled between a series of over-scaled buildings,” says Jeffrey Kenoff, KPF Design Principal. “The design capitalizes on this seclusion and the need to redirect pedestrian flow by carving an active greenway through the site. This green space connects the project’s four inner blocks with terraced towers and echoes the richness, datum, and scale of West Lake and its surrounding mountains.”

To determine the position of the buildings and the overall organization of the site, the team worked with KPF Urban Interface, the firm’s research and design group, to parametrically link shadow impacts, visibility from streets, unobstructed views, maximized daylight, and other key factors into an algorithm that organizes optimal massing along the greenway.

Each of the buildings’ façades is designed to optimize daylight and energy. Designed with a modular porosity, the project utilizes local materials such as terra cotta, stone, and wood.

“Inspired by the many stone walls along the West Lake, the podium wall of West Lake 66 is designed in sinuous bands of rectangular cells that tie the site together,” says Kenoff. “Each cell responds to the program within and can be updated over the lifespan of the building.”

In addition, the podium stacks a mix of uses, forming a layered program intended to provide flexibility. At the upper floors, new office space opens onto a green roof that extends the length of the podium, creating a new public sky park for the city.

For more on this story, go to Kohn Pedersen Fox.