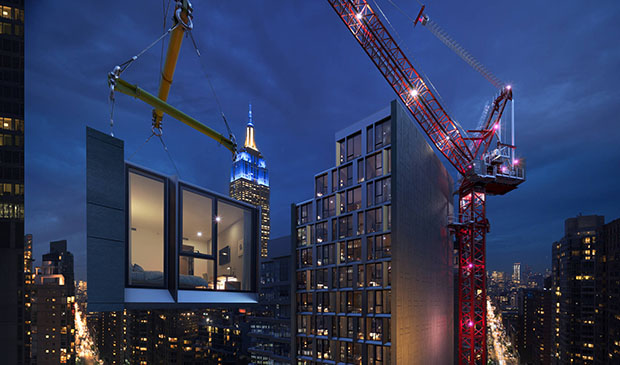 Marriott International Inc. has begun constructing what it says will be the tallest modular hotel in the world, in Manhattan’s NoMad neighborhood. Its 168 guest rooms will be assembled in a factory in Poland, shipped overseas and trucked into New York in the middle of the night, when the city streets can accommodate the oversized loads. The 26-story AC Hotel is expected to rise in 90 days and open in 2020. Marriott wants the tower to serve as a beacon to developers, lenders and factory owners.

Hotel companies like Marriott would like to ramp up modular construction because it can help them open new properties faster, a key path to increasing revenue. The method saves time, because builders can do site work while rooms are being built in the factory, said Eric Jacobs, chief development officer for Marriott’s select-service and extended-stay brands in North America.

Modular construction isn’t exactly new in the hotel world, but it’s unusual enough to give many developers pause. Financing can be difficult to come by because the projects require more upfront expense than a traditional building, according to Sanat Patel, managing partner at Avana Capital, which is providing a US$65 million construction loan for the NoMad project.

At the same time, manufacturing capacity is limited, and many of the existing factories are busy building hospitals, houses and student apartments, said Tom Hardiman, executive director of the Modular Building Institute, a trade group.

A shortage of construction labor that’s led to longer development times has made the factory-built model especially appealing. Marriott has been offering financial incentives for modular projects and connecting developers with architects, contractors and lenders in a bid to spur the effort on.

The AC Hotel is being developed by Concord Hospitality on behalf of owner Robert Chun. Jacobs said that within five years, modular construction could account for 25 percent of all hotels in his pipeline, which includes North American outposts for brands like Courtyard by Marriott and Fairfield Inn & Suites.

The benefit for guests is that factory-built rooms are quieter. In traditional construction, a hotel room usually shares a wall with its neighbor, but modular designs typically call for an insulated gap between rooms.

“Our goal is to move the industry,” said Jacobs. “Cost and time is really important to owners and developers. It’s about speed to market, and any time we can move that needle, it’s good for everybody.”