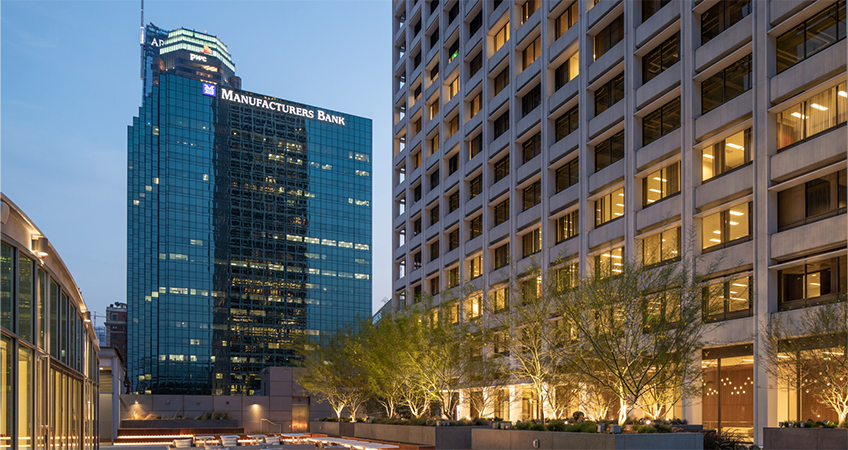 The first phase in the historic preservation-minded rehabbing of Union Bank Plaza (UBP) in Downtown Los Angeles has wrapped up. Completed in 1967, the 40-story office tower, designed by Harrison & Abramovitz and Albert C. Martin & Associates in the International style, became the first L.A. skyscraper to be named as a Historic-Cultural Monument (HCM) earlier this year by the city’s Cultural Heritage Commission following a unanimous 5–0 vote. The nominating application for HMU designation was put forth by the Los Angeles Conservancy in July 2019.

When first announced by building owner KBS, the planned renovation sparked concern from preservationists, particularly with regard to the potential redevelopment of the modernist office complex’s titular three-acre (1.2-hectare) plaza designed by renowned landscape architect Garrett Eckbo. The plaza was even listed by The Cultural Landscape Foundation as an endangered Landslide site.

KBS did not oppose the initial nomination and were game to embark on a project that, in lieu of significant alterations, focused on modernizing the aging skyscraper to attract new tenants while preserving historic elements of the tower and the parking garage-topping public plaza that it rises from. UBP (originally named Union Bank Square) was the first skyscraper to be built in Downtown L.A. after height restrictions were lifted in the late 1950s and was briefly the city’s tallest building following a decades-long reign in the height department by L.A. City Hall. Today, it barely cracks the top 30 list of tallest buildings in Los Angeles.

“Built in 1968, the plaza was intended to be accessed by pedestrians from the street and to be viewed from above by Union Bank employees. Known for his innovative landscape designs that have been described as ‘the horticultural equivalents of the architecture and furniture of Charles and Ray Eames,’ Eckbo is widely regarded as one of the pioneers of Modernist landscape design.

An exemplar of Eckbo’s Modernist design principles, the plaza was built two stories above street level, situated atop the commercial court and parking structure that comprise the base of the office tower. It is entered via a pedestrian bridge from the neighboring Bonaventure Hotel, a monumental staircase and elevator at Fifth Street, and discrete staircases near the freeway, making it accessible from the surrounding neighborhood. Eckbo believed this elevated position would better provide a 'quiet, shaded, water-cooled retreat from the noise, confusion, and austerity of downtown streets.’”

“Union Bank Plaza is a significant historical and cultural monument for downtown Los Angeles,” said Fine of the “saved” property in a statement shared as part of this week’s announcement of the first renovation phase. “Its architecture, especially the outdoor plaza, is extremely unique and was one of the first buildings to be completed as part of the Bunker Hill Urban Renewal project, marking a new era in how the downtown was redeveloped. We are thrilled to see this building become a landmark and for the continued support from KBS who worked closely with us throughout the entire nomination process.”

With architecture, landscape design, and interior design elements all overseen by New York-headquartered firm HLW International, the completed first phase of the property’s “repositioning” entailed a “variety of interior and exterior renovations” according to the aforementioned KBS news release. A significant amount of work focused on revitalizing the 701,000-square-foot (65,125-square-meter) tower’s lobby and its conference center. A total of eight spec tenant suites were also built out as part of the first phase, with plans to create 12 more in the second phase of renovations which will also include the creation of a revamped two-level retail court and an outdoor seating area complete with fire pits. The second phase is slated to be completed next spring.

“The repositioning project provided the opportunity for Union Bank Plaza ‘to be seen in a new light’ while still maintaining the historic characteristics that make it so unique,” added Giovanni Cordoves, regional president of KBS’s western division, in the news release. “We made several upgrades to the property that are aligned with the needs of today’s tenants and completely preserved the historic original shell of the building as well as the outdoor plaza.”

For more on this story, go to The Architect's Newspaper.