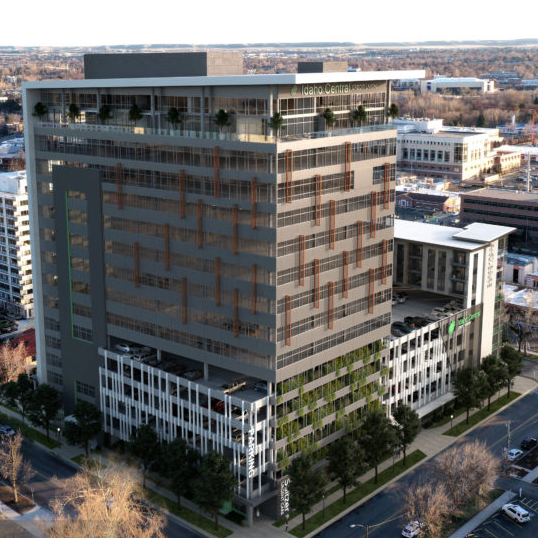 The building would replace a 1970s-era credit-union branch and surface parking lots at the corner of 4th Street and Idaho Street.
26 May 2020 Boise, United States

The Boise skyline could see a dramatic change in coming years, if a new project from Ball Ventures Ahlquist and Idaho Central Credit Union comes to fruition.

The two companies will submit applications with the City of Boise for a new building with two towers, reaching up to 16 stories high. The project would bring a mixed-use offering, with traditional and medical office, a credit union branch, parking, condos, and workforce apartments.

The building would replace a 1970s-era ICCU branch and surface parking lots at the corner of 4th Street and Idaho Street. It would rank as one of Boise’s tallest buildings, just a few stories shorter than the 8th and Main Tower and US Bank Plaza.

Tommy Ahlquist, CEO of BVA, said the project came about when Kent Oram of ICCU approached him about what to do with the current branch on Idaho St. The two partnered on another project for back-office facilities for the credit union in Meridian. On the ground floor, a new ICCU branch will have an internal drive thru and Saltzer Health clinic. The second through sixth floors will hold a parking structure for 460 vehicles and bicycle storage and then, the buildings forks into two towers. The seventh through ninth floors of the southern tower will have multi-family workforce-rate housing with 39 units including a mix of studio, one- and two-bedroom apartments. The seventh through 14th floors of the northern tower will house office space, both medical and traditional, along with four to eight condos and a mechanical penthouse on the 15th and 16th floors.

Ahlquist said they took what they learned at projects his team worked on in Downtown Boise before, including the 8th and Main Tower, City Center Plaza and Pioneer Crossing, and applied it here.

“We’ve spent a lot of time on architecture,” Ahlquist said. “We tried to build something that harmonizes with what’s going on in that part of town. We looked at how to make this a mixed-use project and bring in some housing elements.”

Renderings show a mix of colors and styles, including white, bronze and “ICCU green” accents. Nighttime views include dramatic lighting along lower floors, with pops of green from the ICCU and Saltzer branding schemes.

If approved by the City of Boise, the building would stand taller than any other for several blocks in any direction. Across 3rd Street, the 1960s-era Imperial Plaza residential building stands 12 stories. The new project sits in the Boise skyline as viewed from the bench between the CW Moore Plaza building and St Luke’s campus.

“This is a little bit on the outskirts of the downtown core,” Ahlquist said. “It’s going to be part of the new fabric of the skyline between downtown and St. Luke’s.”

St. Luke’s Health System started work on a multi-year master plan that would supplement its current 10-story building a few blocks away.

The project will include two separate housing components. The south tower will feature three stories of apartments, targeted at workforce housing.

“The importance of integrating housing into this project was key,” development attorney Geoff Wardle said. “The challenge was, how do you balance the issues and interests of the various plans in Downtown Boise and the various goals?”

“We’ll have a joint venture partner for the apartments, [with a partner in that] field of expertise,” Ahlquist said. “We’ll work with them to determine cost structure and pricing. We know it is a need for more housing downtown. We want to provide workforce housing that people can afford.”

The north tower apartments include outdoor balcony space. Most of the units would be one-bedroom, with the rest being two-bedroom and studios.

In the south tower, Ahlquist said the four to eight condos will be higher end.

“It gives you two different housing types on the top of the project,” he said.

The new downtown ICCU project will include as many as 460 parking spaces on five stories.

“We are replacing the existing ICCU building and a parking lot on the north side. CCDC and the City of Boise long identified that as a location for a parking structure,” Wardle said of the city and its urban renewal agency the Capital City Development Corporation. “We knew we were going to have to replace parking and the bank branch. This is the first time that we’ve got office, retail, parking and housing all integrated.”

Wardle said they worked to put extra design effort into the garage, which takes up five floors of the project.

For more on this story, go to BoiseDev.