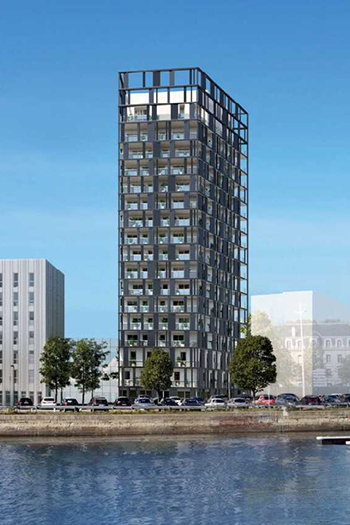 Horizon 360 will house commercial retail and offices, as well as 82 apartments equipped with terraces or balconies, including duplexes on the top two floors.
08 January 2020, Le Harve, France

After the Videcoq and Dumont-d'Urville towers, a third building is planned to further densify downtown Le Havre.

The tower is part of a project by the developer Bouygues Immobilier, which will see 8,900 square meters redeveloped at the border, close to major bus and rail stations. The three existing buildings, which have been occupied by CPAM and Urssaf until recently, will undergo asbestos removal and demolition over several phases from August 2020 to July 2022.

The construction of the complex will be divided into two phases. The first, scheduled for delivery in 2023, will consist of offices, housing, a business tourism residence with 100 rooms, and a parking lot with 290 spaces. Additional uses, such as social housing and green space will follow in 2025. Ultimately, the future building complex of approximately 28,000 square meters will include eight buildings, with 226 housing units, 8,300 square meters of office space, and 720 square meters of retail space. With a projected cost of €40 million (US$44 million), the new complex is part of the revitalization of the urban perimeter of the metropolitan core. New projects will conform to the rectilinear façades rebuilt by Auguste Perret after the Second World War.

The mixed-use tower, called Horizon 360, will house commercial retail and offices, as well as 82 apartments equipped with terraces or balconies, including duplexes on the top two floors. The tower will reach a height of 55 meters, compared to a maximum of 27 meters of nearby buildings, and will be equipped with a panoramic glass elevator. Designed by the architect Christophe Bidaud from the Rouen agency CBA, its 100 percent concrete structure, with an open appearance, will be lined with a façade made of dark-colored aluminum panels. These elements are intended to mitigate strong winds, which will make it possible to accommodate mesh sunshades.

For more on this story, go to Le Moniteur.