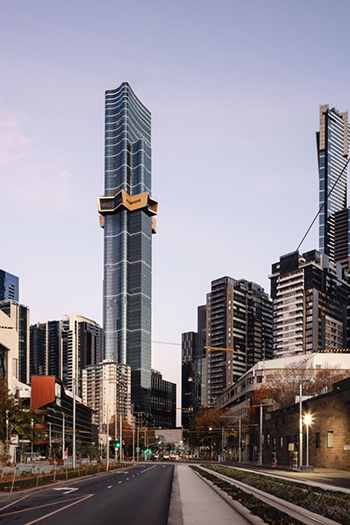 With its roof complete and glass façade in place, the 100-story Southbank tower is also one of the tallest residential towers in the southern hemisphere, topping out on Tuesday, 9 June 2020.

More than three-quarters of the apartments have been completed, with construction workers now finishing the remaining premium “cloud” residences, luxury apartments from level 72 upwards.

World Class Global, the listed Singaporean developer behind the project, said it had sold 94 percent of the tower’s 1,103 apartments in its update this year.

Residents started moving into the tower in 2018 as part of a staged handover of lower level apartments.

After the five-year build, Multiplex regional managing director Graham Cottam said the tower crane at Australia 108 is set to come down in the coming months.

“This is a build that has never been attempted in Australia before—the challenges in getting people and materials to such height required innovation, as did the construction of the cantilevering Starburst [façade],” Cottam said.

“One consideration the build team addressed prior to topping out at Australia 108 is how the structure copes with gale force winds up to 140 kilometers an hour, which blow in from Port Phillip Bay.

“To combat this, underneath level 100 of the tower has been fitted with a 300,000-liter damper tank to act as a counterbalance.”

The tower, designed by Fender Katsalidis, was also the design team behind neighbouring 88 level Eureka tower, completed 15 years ago.

“To finally see Australia 108 and Eureka Tower side-by-side on Melbourne’s skyline is a great, albeit humbling moment for our team,” Fender Katsalidis’ Karl Fender said.

The Australia 108 building is slated for full completion by the end of the third quarter of 2020.

For more on this story, go the The Urban Developer.