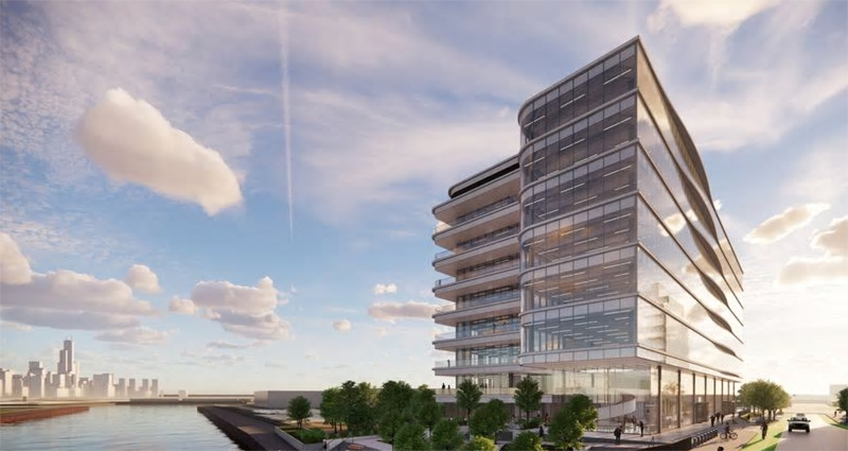 Sterling Bay plans to break ground on the US$6 billion Lincoln Yards megadevelopment early next year, starting with an eight-story, 320,000-square-foot (29,728-square-meter) building along the Chicago River.

The building, which will house offices and lab space, will be at the south end of the sprawling former industrial site, CEO Andy Gloor said. It will be just north of a Home Depot store at 1142 W. North Ave., which is not part of the 55-acre (22-hectare) Lincoln Yards parcel.

Work on the long-anticipated and controversial project, expected to bring thousands of employees and residents to the property, is nearing despite a pandemic that has all but stopped new real estate projects from getting underway.

No tenants are signed but Gloor said interest from biotech tenants gave Sterling Bay the confidence to begin work on the long-anticipated project.

The facility is expected to serve as a tenant pipeline for Lincoln Yards, which also expects to sign large, well-established biotech and pharmaceutical companies, Gloor said.

“We think there can be millions of square feet” leased to biotech firms in Lincoln Yards, he said. “The demand is there.”

Some tenants in the life sciences building are expected to grow large enough to expand into Lincoln Yards a mile west. That is the expectation of Evozyne, which has fewer than 25 employees but anticipates having more than 100 by year’s end, said Jeff Aronin, chairman and CEO of Paragon Biosciences, Evozyne’s parent company.

“We expect this company and this office to grow rapidly,” Aronin said.

Sterling Bay is one of the few developers to kick off a big project during the coronavirus pandemic, after last month securing construction financing for a 47-story apartment and hotel tower at 300 N. Michigan Ave.

Lincoln Yards has been in the works for years, and Sterling Bay last year won city approval to build as much as 14.5 million square feet (1.5 million square meters) of mixed-use buildings on the sprawling riverfront site along the Lincoln Park and Bucktown neighborhoods. The City Council approved up to $1.3 billion in tax increment financing to help pay for infrastructure such as new roads and bridges on and around the project.

Even before the pandemic, Sterling Bay was among several Chicago developers looking to tap into the costly-to-build but underserved sector of life sciences lab space.

Sterling Bay bought the five-story Halsted Street building from Lurie Children’s Hospital, which has since moved research workers to its Gold Coast campus, for almost US$20.5 million in October 2018.

Other tenants signed in the building are Exicure Inc. and Vanqua Bio. CBRE broker David Saad represents Sterling Bay in leasing the building.

Aronin declined to disclose revenue figures for Evozyne, but he said it will become profitable next year.

Previous companies Paragon has launched in Chicago have moved to cities including Paris and Philadelphia in order to expand, Aronin said.

“We’ve had to leave Chicago because Chicago didn’t have the facilities we needed,” he said. “Now that Sterling Bay and other companies are building them, we think Chicago is an emerging global city for innovation.”

Dallas-based developer Trammell Crow Company is gearing up to begin work on a new 16-story life sciences hub along the northern edge of Chicago’s West Loop.

On Wednesday, 29 July, 2020 the developer and Gov. JB Pritzker held a ceremonial groundbreaking for the US$220 million project slated for 400 N. Aberdeen St.

Dubbed Fulton Labs, the roughly 423,000-square-foot (39,297-square-meter) structure is poised to be the area’s first dedicated life science building. It will include 12 floors of lab space, a fitness center, a rooftop tenant lounge, ground-floor retail, and 170 parking stalls.

The Aberdeen Street development is arriving on the scene as other West Loop office tenants like Google extend work-from-home policies through next summer in response to the coronavirus pandemic. Still, the team behind Fulton Labs says there remains strong demand for laboratory space.

“We listened to the needs of the Chicago life science community when designing Fulton Labs,” Grady Hamilton of Trammell Crow said in a statement. “From startups to established global companies, we wanted to create a space that provides the flexibility and room for growth that our prospective tenants need to expand their R&D capabilities.”

Additionally, the building will house a technology incubator known as Portal Innovations to help smaller companies get off the ground and develop new medical products and treatments.

“I’ve watched countless friends and colleagues head to the coasts due to perceived lack of opportunity or infrastructure,” said Portal Innovations founder John Flavin at Wednesday’s groundbreaking. “One of the barriers to scaling our companies and our burgeoning life science ecosystem is [a lack of] programmed lab space. That’s changing today in a big way.”

Some West Loop and River West neighbors initially said they were concerned the planned 16-story facility would exacerbate the area’s existing traffic and parking problems. At a community meeting held last in fall of 2019 to discuss the project, Alderman Walter Burnett Jr. (27th) told residents that increased traffic in the neighborhood was a “foregone conclusion,” but he encouraged Trammell Crow to work with neighbors to reach a compromise.

The development ultimately passed the city’s Committee on Zoning but with conditions that the developer pay US$250,000 for upgrades to the nearby Metra railroad crossing plus another US$300,000 for a new traffic signal slated for Grand Avenue and May Street. The project includes additional streetscape improvements such as wider sidewalks.

During the zoning process, Trammell Crow also agreed to contribute US$3.6 million to Chicago’s Neighborhood Opportunity Fund, which allows developers to build taller and denser projects in exchange for paying into the fund, which fuels economic development in underserved communities on the city’s South and West sides.

Fulton Labs is expected to welcome its first tenants some time in 2022.

For more on this story, go to Block Club Chicago.