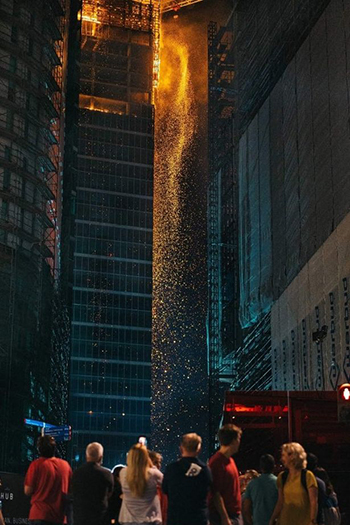 The Warsaw Hub, which is still under construction, was the site of a fire. Image credit: @ihanio.
11 June 2019 Warsaw, Poland

Video showed flames pouring from the top of the 420-foot (128-meter) Warsaw Hub Office Tower building in the Polish capital of Warsaw.

The blaze broke out just after 11 pm local time—and the Warsaw Hub area of the city was placed on lockdown to protect pedestrians from falling debris. Flaming wreckage reportedly fell from the 25th floor.

Polish media said three stories of the building were on fire until it was eventually extinguished at 5 am.

The skyscraper is unfinished, and scaffolding and cranes still surround the structure. There was no one inside at the time and are no reports of injuries.

Sixty firefighters battled for six hours to get the blaze under control. It was feared the lack of wind in Warsaw could cause harmful smoke pollution to linger.

He added: “No one has stayed in the building from the information we have at the moment.” Spokesman Karol Kierzkowski described the mission as “very difficult”, but said there was no danger of the flames spreading to neighboring buildings.

The Warsaw Hub is a series of three buildings that have been under construction since 2016. The burning building was due for completion in early 2020.

For more on this story, go to The Mirror.